A North Carolina State University study shows that fire suppression efforts in Brazilian savannas turn many of those areas into forest lands, with negative consequences for the plants and animals that live there.

Expanding forests suck up CO2 from the atmosphere, but the plants and animals from savannas struggle to cope in the leafier environments. Encroaching forest resulted in major losses of plant and ant species in those areas over the last 30 years – with the most susceptible plants and ants losing massive numbers of species. 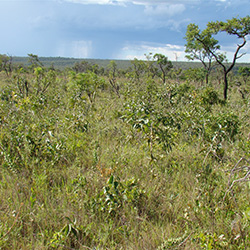 William Hoffmann, professor of plant and microbial biology at NC State and co-corresponding author of a paper on biodiversity in the Brazilian Cerrado, said that the study shows the importance of fire to the savanna. Savannas – pure grasslands and grasslands dotted with trees – cover about 20 percent of the earth’s land; the Brazilian Cerrado is considered the earth’s most biodiverse savanna. 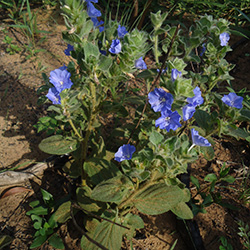 The plants of the Brazilian savanna recover vigorously after fire and flourish in the open vegetation maintained by fire. These species require abundant light, and are at risk of disappearing where forest encroaches due to fire suppression. Photo courtesy of Natashi Pilon.

“The plant and animal species of savannas are highly adapted to frequent fires and high light,” Hoffmann said. “Shady conditions are an enemy to these savanna dwellers. Many of these plant species just can’t persist in a forest. However, fire suppression has taken root in Brazil, so there is a reluctance to allow fires – even to promote the health of the savanna.”

The study, published in Science Advances, examined the past 30 years in the Brazilian Cerrado – a time period that highlights the influence of fire suppression and subsequent forest encroachment. Hoffmann and colleagues from Brazil found that this savanna captured and stored a lot more carbon in the past three decades, but also found that, in areas fully encroached by forest, plant species declined by 27 percent and ant species declined by 35 percent.

Perhaps more importantly, Hoffmann said, losses of plant and ant species unique to the savanna were even more widespread. Savanna plants declined by two-thirds in lands that converted from savanna to forest, while savanna ants declined by a whopping 86 percent.

“These savanna species can’t be moved and can’t really live anywhere else,” Hoffmann said. “This study really highlights the extent to which these species are dependent on their savanna homes.”

The findings could have more far-ranging implications, as Hoffmann added that he would expect to find similar results in other tropical areas where savannas become degraded by suppressing fire.

NC State postdoctoral researcher Rodolfo Abreu is the paper’s first author. Giselda Durigan is the paper’s co-corresponding author. The study was funded by the National Science Foundation under grant DEB1354943, the Brazilian National Council for Scientific and Technological Development and the Sao Paulo Research Foundation.

Note to editors: An abstract of the paper follows.

The biodiversity cost of carbon sequestration in tropical savanna

Abstract: Tropical savannas have been increasingly viewed as an opportunity for carbon sequestration through fire suppression and afforestation, but insufficient attention has been given to the consequences for biodiversity. To evaluate the biodiversity costs of increasing carbon sequestration, we quantified changes in ecosystem carbon stocks and the associated changes in communities of plants and ants resulting from fire suppression in savannas of the Brazilian Cerrado, a global biodiversity hotspot. Fire suppression resulted in increased carbon stocks of 1.2 Mg ha?1 year?1 since 1986 but was associated in acute species loss. In sites fully encroached by forest, plant species richness declined by 27%, and ant richness declined by 35%. Richness of savanna specialists, the species most at risk of local extinction due to forest encroachment, declined by 67% for plants and 86% for ants. This loss highlights the important role of fire in maintaining biodiversity in tropical savannas, a role that is not reflected in current policies of fire suppression throughout the Brazilian Cerrado. In tropical grasslands and savannas throughout the tropics, carbon mitigation programs that promote forest cover cannot be assumed to provide net benefits for conservation.