Brewing researchers at NC State University have developed a new technique that allows them to monitor yeast behavior during fermentation, providing brewers with information they can use to better control the brewing time and quality of future batches of beer.

At issue is something called repitching: a customary practice in which brewers take some of the yeast from one fermented batch of beer and use it to begin the fermentation process in the next batch. In this way, brewers can often recycle one “pitch” of yeast 10 or more times.

But there’s a catch. 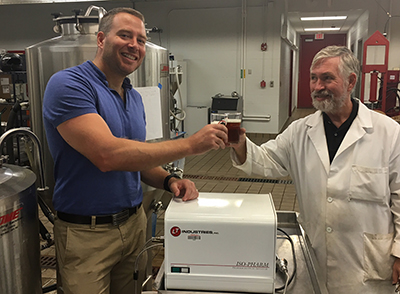 The characteristics of the yeast change over time. And one of those characteristics is how long it takes to ferment the beer. A pitch of yeast may have fermented one batch of beer in five days, but a few batches later it could take eight days or more. The sweet spot, for optimum yeast performance, can vary – but is often between batches three and seven. After that, performance typically declines.

This is where NC State’s brewing scientists come in.

The researchers equipped a brewing vat, called a fermenter, with a sensor that uses near-infrared spectroscopy to measure three variables: ethanol, total sugar content and the number of yeast cells.

“These measurements allow us to assess fermentation performance in a quantitative way,” says John Sheppard, a professor of bioprocessing science at NC State and corresponding author of a journal article on the new technique. “The technology allows us to take measurements as often as we like at any point during the fermentation process.”

This information enables brewers to accurately assess how the yeast is performing and then apply that knowledge to the next batch of beer.

For example, if the yeast is fermenting more slowly, brewers may want to repitch a larger percentage of the yeast into the next batch.

“There are two benefits,” Sheppard says. “First, this information can help brewers improve the predictability of fermentation time – which is important for commercial brewers. Second, it can help brewers ensure consistent quality, given that yeast behavior can impact the quality of the beer.”

The new technique does pose two hurdles for brewers, however.

The second challenge is accurate calibration.

“You have to collect a lot of data when you’re getting started in order to calibrate the readings,” Sheppard says. “That’s essential to making sure that you’re measuring what you think you’re measuring. And you’d need to do that for each type of mixture. For example, you can’t just take the equipment from a light beer and start using it to make measurements in a dark beer. It just won’t work.”

The journal article, “The application of near-infrared spectroscopy in beer fermentation for online monitoring of critical process parameters and their integration into a novel feedforward control strategy,” is published in the Journal of The Institute of Brewing. Lead author of the paper is Lucas Vann, a Ph.D. student at NC State. The paper was co-authored by Johnathon Layfield, a former Ph.D. student at NC State. The work was done with support from the Biomanufacturing Training and Education Center at NC State.