Assessing How Florence Affected the Very Ground We Stand On

A week after Hurricane Florence finally moved out of North Carolina, a small group of researchers moved into areas that were still reeling from the devastation. They were engineers, and their goal was to see how the wind, rain and flooding had affected the earth underlying the affected area.

“We wanted to identify changes to soil and engineered structures – such as berms and bridge pilings – that could pose risks to infrastructure, public health or public safety,” says Brina Montoya, an assistant professor of civil, construction and environmental engineering at NC State who was part of the team. “And evaluations like these can also identify things that merit further investigation to advance our fundamental understanding of how extreme events can affect the performance of infrastructure.” 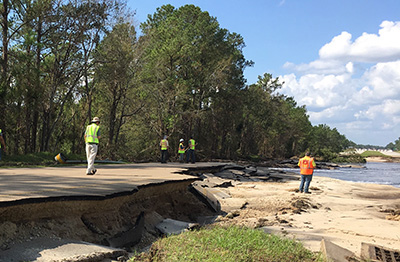 Montoya was part of a Geotechnical Extreme Events Reconnaissance (GEER) team, funded by the National Science Foundation. GEER teams are made up of geotechnical experts from around the country who arrive at the scene of disasters to gather data on the effect that these extreme events – from hurricanes to earthquakes – have on the infrastructure and underlying geology of the affected region.

To do this, GEER tries to bring in researchers as soon as possible after an event, without interfering with emergency response efforts. One challenge with Florence was that flooding continued in the hardest-hit regions long after the hurricane itself had passed on.

The post-Florence GEER team was led by Lee Wooten, a geotechnical expert with GEI Consulting, but included researchers from the University of Illinois, Auburn, Clemson, Louisiana State University, North Carolina Department of Transportation (NCDOT), and the Federal Emergency Management Agency, in addition to NC State.

“GEER teams try to recruit people with both relevant expertise and ties to the affected area,” Montoya says. “Obviously my students and I are based in North Carolina. But Brian Anderson, an expert from Auburn, grew up in Hickory, for example. And Tim Stark, an expert from the University of Illinois, has family living in New Bern.”

From Sept. 24-27, Montoya and four of her graduate students – Jinung Do, Long Vo, Md Ahsanuzzaman, and Rowshon Jadid – collected data at sites ranging from Goldsboro to Wilmington, all in the Neuse and Cape Fear river basins. Some of their findings were promising, others frustrating.

“We worked closely with NCDOT to compare conditions before and after Florence,” Montoya says. “One of the things we took away is that conditions at places like bridge pilings fared better after Florence than they had after Hurricane Matthew. NCDOT saw what had been problematic after Matthew and took steps to account for hurricane risks – and those precautions appear to have paid off.

“On the other hand, we also saw quite a few earthen dam failures,” Montoya says. “That surprised me, until we found that trees had been allowed to grow on many of these dams. We know that’s bad for a dam’s structural integrity, and it shouldn’t have been allowed to happen.”

“Our findings, and the findings of the whole GEER team, will almost certainly inform future research,” Montoya says. “But of equal importance was the opportunity for early-career researchers, like my grad students, to get firsthand experience collecting data under challenging conditions.

“It’s not easy work, but it’s important,” Montoya adds. “And this sort of field experience can’t be replicated in the classroom or the lab.”