NC State has been awarded a major collaborative research grant from the National Science Foundation (NSF) Alliances for Graduate Education and the Professoriate (AGEP) program for a project that aims to improve pathways to success for minority doctoral students in STEM fields. The five-year grant provides a total of $2.2 million to three institutions over five years, with $750,000 going to NC State. 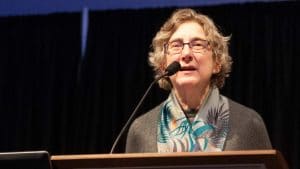 The AGEP North Carolina Alliance (AGEP-NC) project seeks to address a critical issue as recent studies have shown that African-American and Hispanic/Latinx students make up only 2.7 percent and 3.3 percent, respectively, of doctorates granted in STEM disciplines in the U.S. Additionally, the two-year attrition rate of historically underrepresented doctoral students is nearly 50 percent, substantially greater than the rate for nonminority students at most institutions.

The lead researcher on the grant is Marcia Gumpertz, a professor of statistics. She and her team are collaborating with researchers and officials at North Carolina A&T State University and the University of North Carolina at Charlotte to develop, implement and study a model to create institutional, department-level and faculty change and promote Ph.D. completion and progression to faculty careers among historically underrepresented doctoral students in STEM disciplines. The other members of the NC State research team are Winser Alexander, professor emeritus of electrical and computer engineering; Maureen Grasso, professor of textile apparel technology and management; and David Shafer, assistant dean of the Graduate School.

Gumpertz and her team are working with provosts at all three collaborating institutions, deans of the universities’ STEM colleges, and 30 department heads and directors of graduate programs. These collaborators have committed to promoting the AGEP-NC project and supporting the efforts of the project’s faculty fellows. Each participating department will have one of these volunteer faculty fellows, who will receive support and training on mentoring, the experiences of underrepresented minority students and fostering change. These faculty will serve as a bridge between the project and the departments. The project’s first cohort of fellows includes six NC State faculty.

In addition to recently serving as assistant vice provost for faculty diversity at NC State, Gumpertz has been involved in numerous university diversity initiatives, committees and task forces. She is also a member of the Department of Statistics’ Statistical Consulting Core. She has been on the NC State faculty since 1989 and holds a Ph.D. in statistics from NC State.