Gone are the OVT’s signature Green Books, printed packets of tables that had been produced for decades. Gone is a minimalist approach to managing the plots. And going is farm equipment that dates back to the 1980s.

In their place: A website to communicate test results to growers earlier than ever. Intensive plot management to better mirror the farmers’ actual practices. Modern tractors and combines that use GPS technology to manage the plots more precisely. And drones to capture more and different kinds of data.

Choosing the right variety is far and away one of the most important decisions that a farmer has to make.

Ryan Heiniger, of NC State’s Department of Crop and Soil Sciences, directs the program. Funded by companies that pay to have their corn, soybean, wheat and small grain varieties tested at sites throughout the state, the OVT measures performance of hundreds of varieties over the course of a growing season, then reports results to farmers, seed companies and county extension agents.

Choosing the right variety is “far and away one of the most important decisions that a farmer has to make,” Heiniger said. “It sets the stage for everything that happens on that grower’s farm, making a strong difference in whether he has a profit or loss for the year.”

When Heiniger joined the program in 2016, he learned that the Green Books didn’t always come out in time to help growers make solid planting decisions for the following season. 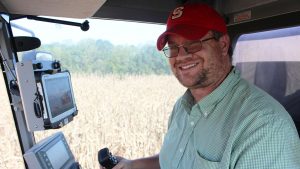 Over the years, seed distributors had begun offering discounts to encourage farmers to make their purchases for the next season’s crop closer and closer to the previous crop’s harvest.

The OVT, Heiniger says, hadn’t been able to keep pace with that change – or with the overall pace of technological change in the agricultural industry.

Gone are the Green Books

To catch up, save money and make the information that the program provides more relevant to growers, the OVT halted the production of Green Books in 2015. Instead, it began publishing results on its website as soon as they were available.

While some users lamented the loss of the printed booklets, company sponsorships have increased, as has traffic on the program website.

Meanwhile, Heiniger and some of his Extension colleagues have been working together more closely as they consider ways to advance both their trials and other research aimed at informing farmers of best production methods.

Those colleagues include Angela Post, the small grains extension specialist; Rachel Vann, the new soybean extension specialist; and Heiniger’s father, Ron, a longtime cropping systems specialist at the Vernon James Research and Extension Center in Plymouth. They are sharing data as well as modern equipment that takes advantage of the latest advances in precision farming. 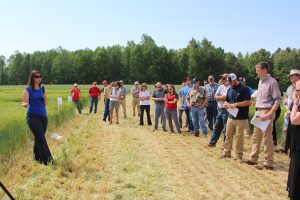 Post has noticed that managing the research plots for insects, diseases, weeds and other factors more intensively has helped instill trust among those who use the data.

“Our yields now more closely match what the average grower can expect on their farms,” she says. “Before, when they’ve been minimally managed, we would get average wheat yields in the high 50s or low 60s. But there are growers who can produce 120 bushels per acre. If the farmer is looking at a variety test down the road that’s only making 65, he’s not going to use information from that test to make his variety decision.”

Heiniger and Post are eager to bring even more innovation to the trials.

Our yields now more closely match what the average grower can expect on their farms.

Rhonda Conlon, director of NC State Extension’s information technology unit, has been working with the crop scientists as they consider ways “to present the OVT content directly from a database so that growers can customize their reports.”

Conlon points to NC State Extension’s Cotton Calculator, a database that builds tables on the fly, filling fields with up-to-date data and allowing the grower to select which variables are important to them.

Heiniger says his end goal “is to be able to say to a grower, ‘Pick a variety, and I’ll show a map of our testing locations as well as locations where county agents are conducting tests. It’ll be color coded to show where yields were below, at or above average. And then you have breakouts on soil type, on amount of precipitation, and on sunlight radiation that visually show how a particular variety has done in all those situations.’”

We want to be the unbiased source of variety performance information for the state’s growers.

While the program has made significant strides when it comes to offering growers more timely information, there’s at least one thing that hasn’t changed since the OVT started nearly 50 years ago, Heiniger says.

“Through all the changes, we’ve stayed true to our mission,” he says. “We want to continue to be the unbiased source of variety performance information for the state’s growers.”

NC State Extension is hard at work in communities across North Carolina.