A new study from North Carolina State University and Clemson University finds that the toxin in a widely used genetically modified (GM) crop is having little impact on the crop pest called corn earworm (Helicoverpa zea) – which is consistent with predictions made almost 20 years ago that had been largely ignored. The study may be a signal to pay closer attention to warning signs about the development of resistance in agricultural pests to GM crops.

At issue is genetically engineered corn that produces a Bacillus thuringiensis (Bt) protein which, in turn produces a toxin called Cry1Ab. This GM corn was originally designed to address a pest called the European corn borer (Ostrinia nubilalis) and went on the market in 1996. 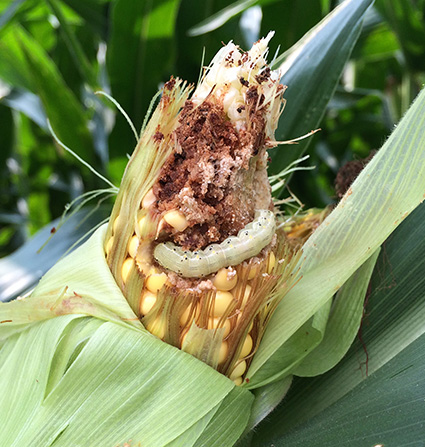 In the late 1990s, scientists found that Cry1Ab was also fairly affective against H. zea. But the scientists also predicted that enough H. zea were surviving to lead to the species developing resistance to Cry1Ab. That work was done, in part, by Fred Gould, an entomology researcher at NC State.

More than 15 years later, another NC State researcher wanted to see if Gould’s predictions held up.

“We wanted to do an observational study in the field to see how, if at all, things have changed since the work done in the ’90s – was there any indication that zea was becoming resistant,” says Dominic Reisig, an associate professor of entomology at NC State and lead author of a paper describing the new study.

Reisig and his collaborator, Francis Reay-Jones of Clemson, evaluated corn crop sites in both North Carolina and South Carolina over two years – and the results were fairly stark.

“There was a warning that zea could develop a resistance to this toxin,” Reisig says. “But no changes were made in how to manage Cry1Ab, and now it appears that zea has developed resistance.”

However, Reisig notes that they cannot say H. zea has definitively developed resistance, because the study was a field experiment, rather than an experiment done in a laboratory setting with pure Cry1Ab toxin.

“Our focus was on determining if there were real-world effects, and there were,” Reisig says. “This may also explain why zea – a significant cotton pest – is becoming less responsive to a related toxin used in GM cotton called Cry1Ac.

“This finding is of limited economic impact at the moment,” Reisig says. “Because agriculture companies have already developed new, more effective Bt toxins for use against H. zea.

“But the study is important. The methods that are agreed upon to show resistance are somewhat arbitrary. The agreed upon metrics for demonstrating field fitness are laboratory studies with an agreed upon diagnostic dose of the toxin. I, and many others, feel that field observations are screaming that changes are happening, but that this is largely ignored. That was one reason for the study.

“These findings are a reminder that we need to pay attention to potential clues about developing resistance,” Reisig says. “We can’t expect there to always be a new GM toxin available to replace the old one.”

The paper, “Inhibition of Helicoverpa zea Growth by Transgenic Corn Expressing Bt Toxins and Development of Resistance to Cry1Ab,” is published in the journal Environmental Entomology. The work was supported, in part, by Monsanto – which developed the GM corn that produces Cry1Ab.

Abstract: Transgenic corn, Zea mays L., that expresses the Bacillus thuringiensis (Bt) toxin Cry1Ab is only moderately toxic to Helicoverpa zea (Boddie) and has been planted commercially since 1996. Growth and development of H. zea was monitored to determine potential changes in susceptibility to this toxin over time. Small plots of corn hybrids expressing Cry1F, Cry1F x Cry1Ab, Cry1Ab x Cry3Bb1, Cry1A.105 x Cry2Ab2 x Cry3Bb1, Cry1A.105 x Cry2Ab2, Vip3Aa20 x Cry1Ab x mCry3A were planted in both 2012 and 2013 in North and South Carolina with paired non-Bt hybrids from the same genetic background. H. zea larvae were sampled on three time periods from ears and the following factors were measured: kernel area injured (cm2) by H. zea larvae, larval number per ear, larval weight, larval length, larval head width. Pupae were sampled on a single time period and the following factors recorded: number per ear, weight, time to eclosion, and number that eclosed. There was no reduction in larval weight, number of insect entering the pupal stadium, pupal weight, time to eclosion, and number of pupae able to successfully eclose to adulthood in the hybrid expressing Cry1Ab compared to a non-Bt paired hybrid. Since Cry1Ab affected these in 1996, H. zea may be developing resistance to Cry1Ab in corn, although these results are not comprehensive, given the limited sampling period, size and geography. We also found that the negative impacts on larval growth and development were greater in corn hybrids with pyramided traits compared to single traits.