In a study that twists nature’s arm to gain clues into the varied functions of the bacterial genome, North Carolina State University researchers utilize a precision scalpel to excise target genomic regions that are expendable. This strategy can also elucidate gene regions that are essential for bacterial survival. The approach offers a rapid and effective way to identify core and essential genomic regions, eliminate non-essential regions and leads to greater understanding of bacterial evolution in a chaotic pool of gene loss and gene acquisition.

In a paper published in Proceedings of the National Academy of Sciences, the NC State researchers harness the power of customized genome editing utilizing the system known as CRISPR-Cas. CRISPR stands for “clustered regularly interspaced short palindromic repeats,” and Cas refers to a family of genes and corresponding proteins associated with the CRISPR system that specifically target and cut DNA in a sequence-dependent manner. The system gives researchers the ability to edit desired DNA sequences to add, delete, activate or suppress specific genes in just about any organism; it has major implications for application in medicine, biotechnology, food and agriculture. 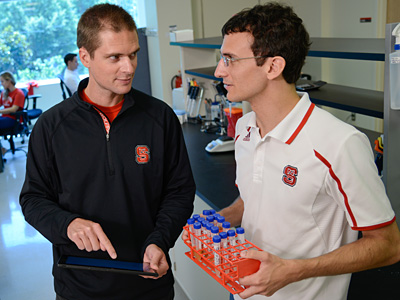 Bacteria use CRISPR-Cas as a self-cleansing defense mechanism and immune system against unwanted DNA invaders such as viruses, plasmids and other mobile genetic elements, says Rodolphe Barrangou, associate professor of food science at NC State and a co-corresponding author of the paper. Although CRISPR-Cas is being engineered to edit DNA sequences in cells of numerous organisms – including plants, animals and humans – much is to be learned about how bacteria cope with DNA self-targeting events, or “auto-immunity.”

In the study, Barrangou and co-authors Todd Klaenhammer, Distinguished University Professor and William Neal Reynolds Distinguished Professor of Food Science, and Ph.D. candidate Kurt Selle examined the yogurt starter culture bacterium, Streptococcus thermophilus, to determine if four predicted genomic islands of importance, including a milk-adaptation area that is essential for yogurt fermentation, could be deleted. S. thermophilus is a beneficial bacterium that is consumed every day by any consumer eating yogurt and Italian cheeses.

“We wanted to screen, using the CRISPR scalpel, areas naturally prone to extinction in S. thermophilus,” Barrangou said. “This is a win-win process because the screening can be harnessed to target any region of the genome and the experiment will tell you whether the region is expendable or not.”

CRISPR-Cas eliminated the four regions, including the region containing the milk-utilization gene.

“Once that region was gone, the bacteria could no longer preserve milk, yet the cells were still alive,” Selle said. “That result showed that this area was expendable and not essential to bacterial survival when not growing in milk.”

“We did not expect that magnitude of reduction in a relatively small genome,” Barrangou said. “When you use pinpointed targeting of a specific portion of the genome, you expect a smaller deletion to occur.” 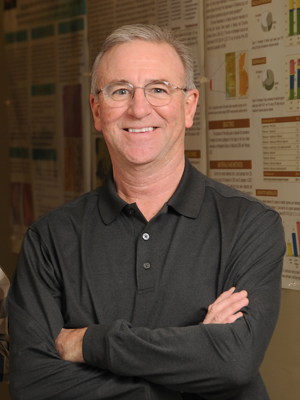 Todd Klaenhammer is a co-author of the CRISPR-Cas paper published in PNAS. Photo by Roger Winstead.

The researchers say that that the same techniques can be used as a template to study essential and non-essential genomic regions in any bacterium of interest – and can perhaps be used to target unsavory antibiotic resistance genes in bacterial pathogens and occasionally in beneficial bacteria.

“Bacteria are littered with genes that are unknown – it’s like genetic dark matter,” Selle said. “Now we can learn more about what these elements provide and remove any undesirable trait.”

“This work represents a stunning discovery of the grand and expansive genome rearrangements that occurred in beneficial bacteria that evolved to preserve foods, and now present genomic tools that can be used to expand their fermentation properties in the future,” Klaenhammer said. “With our ever-increasing awareness of the important role played by beneficial microbes, this opens new avenues for understanding how manufacturing workhorses operate, and how valuable bacteria evolve.”

The research was funded by NC State start-up funds, the North Carolina Agriculture Foundation and DuPont Nutrition and Health.

Note: An abstract of the paper follows.

Published: June 15, 2015, online in Proceedings of the National Academy of Sciences

Abstract: Genomic analysis of Streptococcus thermophilus revealed that mobile genetic elements (MGEs) likely contributed to gene acquisition and loss during evolutionary adaptation to milk. Clustered regularly interspaced short palindromic repeats–CRISPR-associated genes (CRISPR-Cas), the adaptive immune system in bacteria, limits genetic diversity by targeting MGEs including bacteriophages, transposons, and plasmids. CRISPR-Cas systems are widespread in streptococci, suggesting that the interplay between CRISPR-Cas systems and MGEs is one of the driving forces governing genome homeostasis in this genus. To investigate the genetic outcomes resulting from CRISPR-Cas targeting of integrated MGEs, in silico prediction revealed four genomic islands without essential genes in lengths from 8 to 102 kbp, totaling 7% of the genome. In this study, the endogenous CRISPR3 type II system was programmed to target the four islands independently through plasmid-based expression of engineered CRISPR arrays. Targeting lacZ within the largest 102-kbp genomic island was lethal to wild-type cells and resulted in a reduction of up to 2.5-log in the surviving population. Genotyping of Lac survivors revealed variable deletion events within the flanking insertion-sequence elements, all resulting in elimination of the Lac-encoding island. Chimeric insertion sequence footprints were observed at the deletion junctions after targeting all of the four genomic islands, suggesting a common mechanism of deletion via recombination between flanking insertion sequences. These results established that self-targeting CRISPR-Cas systems may direct significant evolution of bacterial genomes on a population level, influencing genome homeostasis and remodeling.