Synthetic Microorganisms for Agricultural Use

By 2050, the world’s population is estimated to exceed 9 billion people. A challenge to this rising food demand is that crops will have to be grown on the same or less land as today. Additionally, global climate change is causing considerable uncertainty in the ability of the current food production system to adapt to an unknown future.

To address these issues sustainably, scientists from many disciplines have been investigating ways to increase crop yields and prepare for a changing climate. Considerable effort has focused on enhancing the traits of the crop plants themselves, to enhance their growth, make them resistant to disease, or tolerant to environmental stressors like drought or high salinity conditions. Conversely, a growing area of research is looking at how microorganisms, such as bacteria and fungi, influence these plant characteristics.

The relationship between plants and microorganisms is well known. However, researchers are still working to understand the full complexity and extent of interactions between the two groups. We have seen that microbes are important for plant nutrient acquisition, plant growth and protection against disease. Certain types of bacteria are commercially available and used to increase yields and decrease fertilizer use (Farrar et al. 2014).

Synthetic biology may be able to create a suite of microorganisms that will benefit crops in various ways (see Table 1). A type of genetic engineering, synthetic biology can be described as the “repurposing and redesign of biological systems for novel purposes or applications” (Marner 2009). Scientists are trying to design microbes that will perform reliably and target specific plant/microbe interactions. This issue brief describes current research on the topic and discusses issues that may arise should a synthetic microbe become available for environmental release. 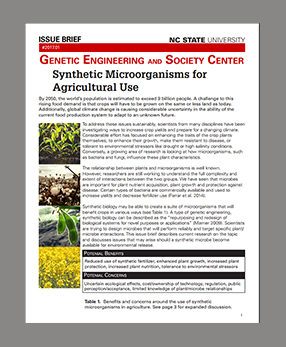 Biodesigned, Jan. 21, 2021 | Environmental scientist Todd Kuiken weighs the pros and cons of deploying biotechnology to protect vulnerable ecosystems. Can altering the DNA of species save them from the impacts of human induced climate change, or will it wreak a new form of havoc?”

Coral bleaching can be prevented by replacing the coral’s symbiotic microalgae with strains that have been made more heat tolerant using assisted evolution.

CRISPRcon is a unique forum bringing diverse voices together to discuss the future of CRISPR and related gene editing technologies across applications in agriculture, health, conservation, and more. GES Center led webinars on Equity in Environment and Agriculture will be held on October 13 and 15.

« Variation at a Central Metabolic Gene Influences Male Fruit Fly Lifespan
Overcoming Challenges to Infusing Ethics into the Development of Engineers: Proceedings of a Workshop (2017) »