In the Galápagos, invasive species are driving native animals to extinction. Some conservationists are asking whether genetic manipulation is the solution

THIS STORY WAS ORIGINALLY POSTED IN Scientific American on November 1, 2017 | By Stephen S. Hall 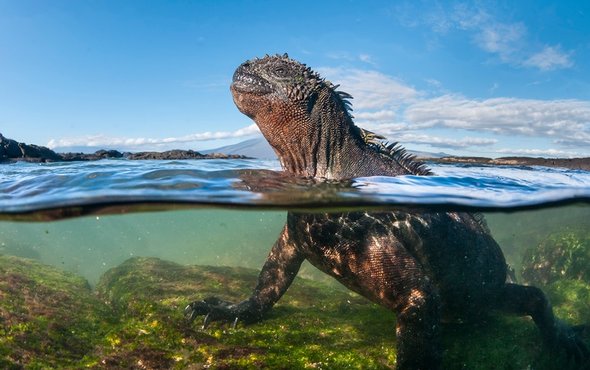 Marine iguanas of the Galápagos are vulnerable to feral cats and other invasive predators. Credit: Tui de Roy, Scientific American

Campbell first became intrigued by the possibilities of gene drive in 2011, when he sat in on a conference call between biologists at North Carolina State University and officials of the U.S. Fish and Wildlife Service to discuss a possible genetic approach to control a runaway mouse problem on Southeast Farallon Island, about 20 miles west of the California coast, near San Francisco. John Godwin, a North Carolina State neurobiologist who studies animal behavior, had learned of the Farallon issue while skimming the Internet in 2011. He happened to be at a university with an established infrastructure dedicated to experimenting with—and considering the ethical implications of—genetic manipulation.

Two of his colleagues, Fred Gould and David Threadgill, were already discussing the possibility of tinkering with the mouse genome in an attempt to create mice incapable of producing female offspring. Two other colleagues, Jennifer Kuzma and Jason Delborne, became deeply involved in how to engage the larger world of stakeholders—government regulatory agencies, animal management officials, bioethicists and, of course, the general public—in considering the prospect of releasing genetically altered animals into the wild. Kuzma and Gould serve as co-directors of the Genetic Engineering and Society Center at North Carolina State.

To make a long story short, Island Conservation joined forces in 2016 with other international groups to launch the GBIRd—Genetic Biocontrol of Invasive Rodents—program. GBIRd scientists are “cautiously investigating” genetic tools to preserve island ecosystems. The advent of the gene-editing tool CRISPR boosted efforts to develop an alternative approach to eradication. Those efforts gained traction in July, when the Defense Advanced Research Projects Agency gave the North Carolina State group $3.2 million to pursue gene drives for mouse eradication on islands.

Download: Could Genetic Engineering Save the Galápagos?, Scientific American

Jabeen Ahmad, September 27, 2022 | Food insecurity is a concern now and in the future. Globally, the United Nations estimates that about 690 million people are food insecure. By the year 2050, the world population is expected to reach nine billion people, requiring food supplies to double.