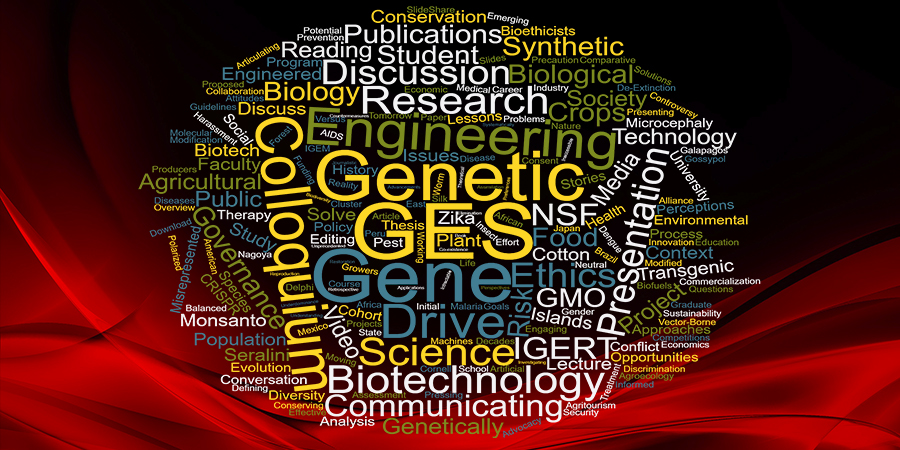 Word cloud of all the topics discussed at GES Colloquia since 2012.

It is not often that a new technology is at once hailed as a potential solution to pandemic disease, wildlife conservation and hunger, while also being feared as a potential military and environmental “bioweapon.”

Gene drives, a powerful genome editing technique that can “drive” a genetic trait through a population based on rates of up to 100% inheritance, are being discussed at a United Nations meeting on synthetic biology in Montreal, Canada this week. The discussions, led by a group including technical experts, working under the UN Convention on Biological Diversity (CBD), are intended to develop recommendations around protocols and regulations relating to the field of synthetic biology.

One of those experts in Montreal this week is Dr. Todd Kuiken, a senior research scholar with the Genetic Engineering and Society (GES) Center. A member of the UN’s Ad-Hoc Technical Experts Group (AHTEG) on synthetic biology, Dr. Kuiken is focused on the leading edge of synthetic biology. He has written extensively on the issues surrounding gene drive technologies, including a book chapter called Vigilante Environmentalism: Are Gene Drives Changing How We Value and Govern Ecosystems?, and a piece in Slate on the implications of military funding of synthetic biology research.

Dr. Kuiken’s projects include a DIYbio initiative that is embedding biosafety and biosecurity experts in community labs to develop protocols and processes where few currently exist. He has also started work on a Citizen Health Innovators project, that is building engagement channels between innovators, patients, ethicists, and regulators to design adaptive oversight tools that will foster a culture of empowerment and responsibility.

In 2008, GES Center Co-director and University Distinguished Professor Dr. Fred Gould published Broadening the application of evolutionarily based genetic pest management, helping to establish NC State University as an interdisciplinary thought leader in the field. In 2012, with support from a National Science Foundation research training grant (NSF IGERT), Dr. Gould, together with other faculty at NC State, launched the GES program in Genetic Pest Management (GPM).

The program, which led to the establishment of the GES Center, had three cohorts of graduate students research how biotechnology might be applied to the seemingly intractable societal problems caused by mosquitoes, invasive rodents, and agricultural pests. These cohorts have examined the technical, regulatory, ecological, and ethical aspects of using gene drives, including publishing Anticipating complexity in the deployment of gene drive insects in agriculture (2017) in the Journal for Responsible Innovation.

The work of the second cohort also led to NC State’s involvement in gene drive research aimed at removing invasive species threatening island wildlife. Part of this work is being supported as part of DARPA’s Safe Genes Program. The project is being led by GES-affiliated faculty, including John Godwin, Alun Lloyd, and Jason Delborne, and is a collaborative effort with participants from Texas A&M University, the USDA, Island Conservation, the University of Adelaide, and Commonwealth Scientific and Industrial Research Organization (CSIRO), based in Australia. GES Center faculty also participate in a larger partnership focused on this problem named GBIRd (Genetic Biocontrol of Invasive Rodents) that includes national and international participants.

Dr. Jennifer Kuzma, GES Center Co-director and a Goodnight-NC GSK Foundation Distinguished Professor, probably spends more time researching, speaking, and writing about public policy, risk-analysis and the regulation of products of genetic engineering – such as gene drives – than anyone else in the field.

Dr. Kuzma was co-author of the recent National Academies of Sciences (NAS) Preparing for Future Products of Biotechnology (2017) consensus study, which included recommendations on biotech products that do not and will not fit into current regulatory frameworks. Dr. Kuzma also co-authored Engineering the Wild: Gene Drives and Intergenerational Equity (2016), a peer-reviewed article looking at the legal, policy, and ethical issues posed by gene drive technologies. One of her current projects is the NSF-funded Cultivating Cultures of Ethics in STEM program, which uses graduate student-led focus groups with multiple stakeholders to examine what ‘responsible innovation’ means in the context of bioengineering.

In February of 2016, Dr. Kuzma and Dr. Gould organized the NSF-funded Roadmap to Gene Drives workshop, which brought together over 50 scholars to facilitate discussions and develop recommendations on frameworks around research and governance of the technology. The program committee has produced and co-edited a special edition of the Journal of Responsible Innovation (in press), which will include 12 papers from participating speakers, attendees and CoPIs.

One of the criticisms of genetic engineering is that scientists and researchers in the field have failed to communicate or engage with community groups and publics that will or could be impacted by their work. Recognizing the concerns raised by people who are worried about the technology is an important aspect of our approach to biotechnology.

Dr. Jason Delborne, a GES Center executive committee member and associate professor of science, policy and society, focuses his work on community engagement around controversial technologies, such as gene drives and GMOs. Dr. Delborne was co-author of another recent NAS consensus study, Gene Drives on the Horizon (2016), which summarized current understanding of the scientific discoveries related to gene drives and their accompanying ethical, legal, and social implications.

Dr. Zack Brown, also a GES executive committee member and assistant professor of agricultural and resource economics, led an international workshop on ‘Environmental Release of Engineered Pests,’ funded by the Organisation for Economic Co-operation and Development (OECD). This meeting brought together 70 representatives from 13 countries with the aim of laying the groundwork for an international framework to govern gene drives.

Dr. Brown is also the principal investigator conducting a USDA-NIFA funded survey, with Dr. Delborne and Professor Paul Mitchell of University of Wisconsin, on “Assessing Public Perceptions of Gene Drives for Invasive Pest Control.”  The aim of the survey is to understand how consumers will respond to foods produced using gene drives (and how much they are willing to pay for them), and citizens’ priorities for risk assessment of these technologies.

Gene drives are a novel and complex technology, still in the relatively early stages of development. What is apparent is that there are still many questions left to be answered about how, where, and why they may be developed and used, and finding the right answers will require many different approaches. The GES Center works at the nexus of these approaches, and is helping to shape the futures of biotechnology by integrating scientific knowledge and public values.

This presentation focuses on ethical and oversight issues as they relate to the insertion of human cells into nonhuman animals, e.g., “chimeric research.”