Editor’s Note: This is a guest post by Hannah Burrack and Dominic Reisig, entomology researchers and extension specialists at NC State. This post is part of our NC Knowledge List series, which taps into NC State’s expertise on all things North Carolina.

Arthropod pests (both insects and mites) rob North Carolina farmers every year by eating into their crop yields. No matter what a grower does, it seems like there is always a destructive pest waiting in the wings. We’ve curated a list of 10 of the most vexing pests that prey on agriculture in North Carolina. 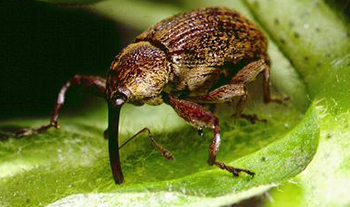 In the early 20th century, this little (6 millimeter), brown, non-descript weevil, native to Mexico and Central America, slashed cotton yields in the southern United States. At the time, cotton and tobacco were the primary crops in North Carolina. But the boll weevil, in combination with economic and environmental factors, forced North Carolina farmers to diversify their crops, and
inspired songs and even a monument.

This insect was so destructive that an ambitious eradication effort was tested in Alabama, Mississippi and Louisiana during the early 1970s. Later that decade, nationwide eradication was attempted for this insect, beginning in the northernmost reaches of cotton production (Virginia and North Carolina), and sweeping across the Cotton Belt. The war against boll weevils in the southeastern U.S. was so successful that a boll weevil has not been captured in a pheromone trap in 15 years.

Bollworm, also known as corn earworm and tomato fruitworm, is known to most gardeners as the caterpillar that feeds in the tips of sweet corn. However, it feeds on hundreds of plants, both in crop fields and in the wild. This species, along with a close relative, is arguably the most damaging crop pest worldwide. It is resistant to insecticide sprays and has just become resistant to some varieties of corn and cotton that are genetically engineered to kill this insect (Bt corn and cotton; U.S. soybean is not genetically modified to kill insects). Bollworms cost North Carolina cotton growers more than $20 million – and soybean growers almost $50 million – in 2017. Those expenses stem from both crop losses and the costs of controlling bollworm – and that doesn’t include bollworm-related costs to other crops.

This is the pesky critter that eats holes in your collards, kale and other leafy greens. It’s resistant to nearly every class of insecticide out there. 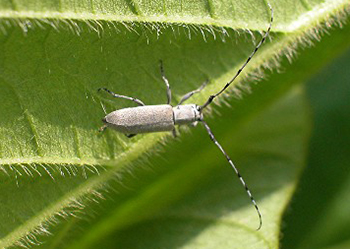 While not a particularly common insect in North Carolina, it can be a huge headache for some soybean growers. This insect is native to the U.S. and has a number of wild hosts, including cocklebur, giant ragweed and wild sunflower. Soybeans production began around the turn of the 20th century, but this insect wasn’t found in soybeans until the late 1960s.

The first report was from North Carolina, and this insect was rapidly found in soybeans across the southern and midwestern U.S. Unfortunately, researchers have yet to develop truly effective methods to manage this insect. Growers can plant later or harvest sooner, but such practices can hurt yields – and it’s difficult to predict whether the Dectes stem borer will show up in a given field.

This insect is the first documented invasive crop pest in the U.S. and can be extremely devastating to wheat. During the Revolutionary War, Great Britain hired Hessian mercenaries from the state of Hesse-Cassel. A plausible theory is that these insects were transported to the U.S. in the straw bedding of these soldiers. The name “Hessian fly” was given to the pest by the revolutionaries, as an insult to those mercenaries. Thomas Jefferson chaired a committee of the American Philosophical Society that tried (without success) to find a way to manage this insect.

Management for this insect is largely dependent on varieties that can tolerate damage. Larvae quickly move from eggs laid on the leaf to protected areas in leaf folds at the base of the plant. There, the larvae become immobile and create a feeding site. Resistant varieties work by killing the cells at the site of feeding, thereby starving the larvae. Wheat breeders must constantly create new varieties, as the insect overcomes the old varieties.

Someone has to be the oddball and, in the pest world, this award would have to go to the silver spotted skipper (see the photo at the top of the page). The adult is an attractive orange, brown and white butterfly, but it is a monstrosity as a caterpillar. These caterpillars are relatively minor pests of soybeans in North Carolina, generally not numerous and eating only a little leaf material.

They have a fat, lime-green body with yellow prolegs (fleshy extensions that help them grip). The head of larger caterpillars is a dark maroon purple, disproportionately large in relation to the body, with two orange spots resembling eyes. When disturbed, they can manipulate their “neck,” giving them a snakelike appearance.

This group of tiny, worm-like mites (eight-legged relatives of insects) can feed on many plants, including wheat, strawberries, blueberries, blackberries and more. They are so small they cannot be seen with the naked eye, so their damage is often mistaken for disease symptoms. In addition to directly damaging plants, they can also transmit viruses. 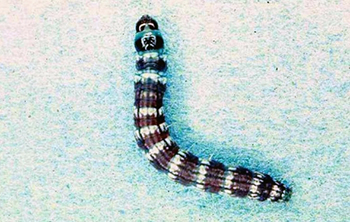 Okay, this may not be that impressive, but can you think of many animals that can do this? This insect is native to the southeastern U.S. and likely evolved to feed on the plants that moved in after the regular fires that used to take place in the pine and savannah habitats of the Coastal Plain.

The adult moths can detect smoke with their antennae and preferentially lay eggs following a fire. The caterpillars live in silken tubes at the soil surface and can be a pest for soybeans, girdling the mainstem through their feeding. They can move through these tubes relatively rapidly and are just as speedy forward as they are backward. 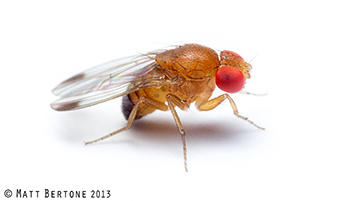 This invasive cousin of the “fruit flies” you may see hovering around your overripe banana or open bottle of wine is a devastating pest of berries and cherries. They achieve this feat by using their serrated, knife-like ovipositor, or egg-laying device, to saw through the skin of ripening and ripe fruit. Their cousins lack this tool and can only feed on rotting fruit.

Once those spotted wing drosophila eggs hatch, they grow in fly larvae, or in entomological terms, maggots – something no one wants in their food! If left unmanaged, they can infest 100 percent of the fruit in fields, and management only works if the weather is dry. Don’t worry, though, there’s zero tolerance for larvae in fruit sold to consumers. That means that if even one larva is found, fruit cannot be sold. A huge risk for farmers!

Pest That Doesn’t (Usually) Live Up to the Hype: Japanese Beetles (Popillia japonica)

These large and (to an entomologist) attractive beetles can certainly chew up the leaves of your prize roses and favorite Japanese maple, but they rarely cause enough damage to crops to cost growers money – and they require heavy duty insecticides to kill. In most cases, trying to control them does more harm than good.