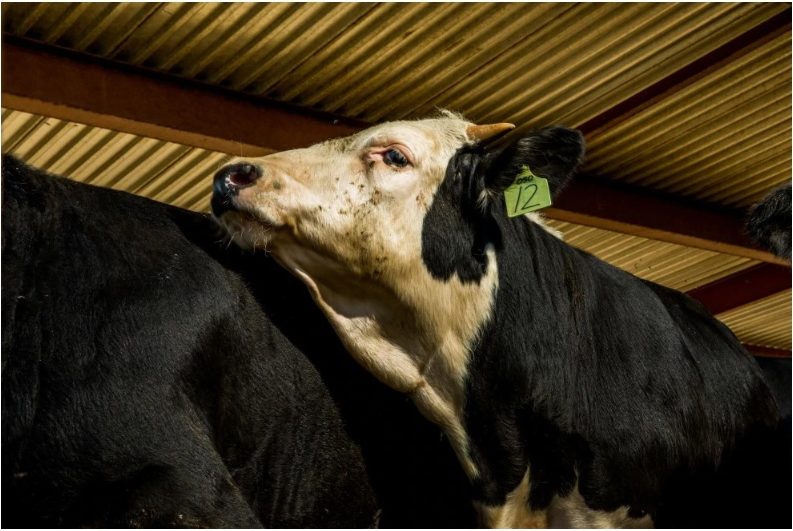 GENE-EDITED FARM ANIMALS ARE COMING. WILL WE EAT THEM?

Cutting-edge lab techniques could improve animal breeding, but society may not be ready — Washington Post

Three cows clomped, single-file, through a chute to line up for sonograms — ultrasound “preg checks” — to reveal if they were expecting calves next summer.

“Right now. This is exciting, right this minute,” animal geneticist Alison Van Eenennaam said as she waited for a tiny blob of a fetus to materialize on a laptop screen on a recent afternoon at the Beef Barn, part of the University of California at Davis’s sprawling agricultural facilities for teaching and research.

The cows had been implanted a month and a half earlier with embryos genetically edited to grow and look like males, regardless of their biological gender.

The research project pits one of the hottest fields in biotechnology against the messy politics of gene modification.

As scientists in labs across the world create virus-resistant pigs, heat-tolerant cattle and fatter, more muscular lambs, a big question looms: Will regulation, safety concerns and public skepticism prevent these advances from becoming anything more than fascinating laboratory experiments, or will the animals transform agriculture and the food supply? So far, gene-editing tools have jump-started research worldwide, creating more than 300 pigs, cattle, sheep and goats. Now, proponents of the field say the United States is at a make-or-break moment, when government action over the next year could determine whether any gene-edited food animals make it to market.

A regulatory system cannot be based 100 percent on science or scientific risk, and values come into play when setting the standards

The announcement last month that a Chinese researcher had created genetically edited human babies sparked an international furor and a moral debate. But while such research is effectively outlawed in the United States and was swiftly condemned by a group of leading researchers, Van Eenennaam and her colleagues are pushing similar techniques into the barnyard. There, such applications are far less hypothetical. But the societal consensus about how or whether they should be used – and how to prove the technology is safe for animals and people who eat them — is even less clear.

Just down the road from the Beef Barn are five bulls and a heifer, the second generation of cattle that have been gene-edited to lack horns, avoiding a grisly procedure in the dairy industry called “disbudding,” when calves’ horns are burned or cut off. The new gene-editing attempt is even more audacious.

For farmers seeking to maximize beef production, all-male cattle could be a win: Males gain weight more efficiently than females. For scientists, successful births would add to a menagerie of gene-edited animals that demonstrate the power of the technology beyond the lab, where their use is mostly routine and uncontroversial.

“The technology challenges of producing genetically engineered animals are gone,” said Charles Long, a biologist at Texas A&M University who says he works in pretty much any livestock animal except chickens. “What we have to do is really start producing the animals that have these traits.”

Gene-edited plants will soon be in the grocery store, but similar tinkering with the DNA of animals faces a far more uncertain future. The regulatory process for getting animals approved is more complex and treats the edited DNA as a veterinary drug — a difference that animal scientists argue will effectively kill their field by preventing innovations that could make raising livestock more sustainable, more efficient or more humane. Many advocates and ethicists agree that the current oversight system is a poor fit but think that scientists and industry underestimate potential safety concerns.

“I don’t want speed limits, either, but they have a role,” said Jaydee Hanson, senior policy analyst at the Center for Food Safety.

The Trump administration has signaled its interest in modernizing regulations to foster innovation. The Food and Drug Administration, which oversees animal gene editing, announced in late October that it will issue new guidance next year to calibrate the regulation to the risk posed by the product. Sonny Perdue, the secretary of agriculture, met with food biotechnology leaders in November.

Researchers, after years of fighting public skepticism on genetically modified foods, are hopeful but not optimistic. Advocates are lining up on both sides of the issue.

For decades, scientists have been transferring genes between species in the lab — inserting a gene from a microbe into a cow’s DNA to make it resistant to a painful infection called mastitis, or repurposing a gene found in bacteria to reduce pigs’ phosphorus pollution. The only genetically modified animal approved for food consumption in the United States is the fast-growing AquAdvantage salmon, but it isn’t being sold because of a labeling requirement originally introduced in a spending bill.

To oversee the emerging field of biotechnology, the Reagan administration, rather than passing new laws, created a “coordinated framework” in which regulatory agencies would use their existing laws for oversight. Genetically engineered animals thus fall under the FDA’s process for approving new veterinary drugs.

The regulatory path was complicated, and the research had to contend with the public “ick” factor.

Van Eenennaam recalls one of her fondest scientific memories — more than a decade ago, she inserted a gene from a roundworm into a mouse and successfully showed that this could generate heart-healthy omega-3 fatty acids in the rodent’s milk. The experiment was conceived as a proof of concept before extending the technology to cows, but the grant proposal was rejected.

“While it may be putting the cart before the horse, the proposal has not mentioned the problem with acceptance of transgenic food products,” a reviewer wrote. “Given the ‘pure and wholesome’ public perception of milk products, it may be particularly difficult to gain widespread public acceptance for transgenic milk products — despite their benefits.”

Many who worked in the field at the time recall feeling discouraged by similar rejections.

“I’m angry as hell 90 percent of the time,” said Long, who now plans to move some of his work to Brazil, where the regulatory path is more certain. “It’s been a 20-year fight.”

When Van Eenennaam was traveling in China a few years ago, she visited a lab where the omega-3 gene had been inserted into cows.

“I kept getting these emails from researchers in China, and then I saw the cow,” she said, bringing up a photo on her computer screen. “Good on them.”

Scientists were re-energized by the invention of new and more precise technologies, the most famous of which is CRISPR, short for clustered regularly interspaced short palindromic repeats.

Using CRISPR, scientists can quickly, easily and cheaply make targeted cuts to the genome and make changes or insert new genes. Instead of introducing the foreign DNA that had triggered public skepticism, they could delete or change a single letter out of billions in an animal’s genome. Such changes happen routinely in nature — they are the basis for evolution — so scientists were hopeful that regulators and the public would see these animals differently.

But in early 2017, the FDA put out draft guidance indicating that animals with intentionally altered DNA would be regulated just like the genetically modified animals have been — as containing veterinary drugs. Proponents and skeptics alike felt it wasn’t the right move.

“We need to rethink this — look at the science, look at the potential risk, look at the products that are going to be developed. Is there a need for oversight, and what is the appropriate mechanism for that oversight?” said Greg Jaffe, biotechnology project director at the Center for Science in the Public Interest.

Van Eenennaam was in the middle of an experiment at the time. There were two bulls on campus that had been gene-edited to be “polled,” lacking horns, through a collaboration with the company Recombinetics. Overnight, the animals’ status changed.

“We went from having two bulls that were polled to having two 2,000-pound drugs,” Van Eenennaam said. “It sounds funny, but all of that becomes a huge liability.”

In written responses to questions, the FDA clarified that gene-edited animals aren’t considered drugs but that they contain new animal drugs.

Researchers and companies argued that it wasn’t rational to treat all gene-editing the same, whether it was a single DNA letter change that was also found in nature or a radical rewrite of the genome.

“Somebody comes to me and says, ‘Randy, I want to make these genetic modifications and put it in the food chain. What is it going to take?’ I tell them I don’t know how long, and I don’t know how much it’s going to cost, because we don’t have any examples,” said Randall Prather, a reproductive physiologist who runs the National Swine Resource and Research Center at the University of Missouri. “You hear a click when they hang up.”

New regulations on the way

A few days before the scheduled preg checks in Davis, the FDA sent out a new Plant and Animal Biotechnology Innovation Action Plan. The details will be rolled out over the next year, but the goal is to clarify its approach, reduce barriers to innovation and protect public health. The agency said in a statement that it could be more “flexible with respect to data” if a genetic alteration does not differ in any “relevant way” from nature. But it also added that genome editing techniques “may carry unique risks.” Scientists and watchdogs alike are worried that the process will take place behind closed doors.

Kuzma is particularly concerned about unforeseen changes to DNA that occur because tools such as CRISPR aren’t perfect and may make unintended changes to other genes. She worries that the regulatory process may be too industry-friendly.

“It’s going to be a very closed process and a very cozy relationship between the technology developers and the federal government,” Kuzma said.