Curating Art and Science: Art’s Work in the Age of Biotechnology

This post originally published on the blog ENGINEERING LIFE.

We are pleased to have this guest blog from Science and Technology Studies scholar and curator Hannah Star Rogers.

Resurrecting the Sublime is a synthetic biology based artwork which presents the scents of extinct plants. A collaboration between synthetic biologist and designer Christina Agapakis, IFF supported olfactory researcher and artist Sissel Tolaas, and artist Daisy Ginsberg, the artwork is produced through a combination of techniques, materials, and ideas from art and biotechnology. The result is an imagined fragrance from an extinct plant made possible by synthetic biology and olfactory research situated in a setting which includes pumice-type rocks, digital landscape renderings, and herbarium specimen images to invoke the plant’s original but lost habitat. By incorporating the sense of smell into the lost landscape, the artists gesture at the less obvious elements which are now missing: it is not only the individual plant but the habitat which is extinct. In the installation, the smeller links the smell and the landscape, reuniting them. Resurrecting the Sublime required the expertise of artists, designers, botanists, biochemists, biological engineers, and perfumers. It reaches for an aesthetic experience of the unknowable by presenting the possibility of fragrance of flowers which are now extinct using synthetic biology techniques. This work will be installed as part of the Art’s Work in the Age of Biotechnology: Shaping Our Genetic Futures at the Gregg Museum of Art and Design in Raleigh, NC in the fall of 2019. The show will be sponsored by the North Carolina State University’s Center for Genetic Engineering and Society (GES) Center and the NC State University Libraries Exhibits Program.

Resurrecting the Sublime functions as a provocation and critique of attempts to recreate living organisms from extinct genome fragments. Once the genetic sample is sequenced, paleogeneticists assist in identifying gene pathways that produce fragrant enzymes. The gene sequences are then synthesised, inserted into yeast, and cultured to produce the molecules, which are then extracted. Inhaled together, the samples offer a multidisciplinary approximation of the smell of a no longer living flower. In displaying alternative scents, the work emphasizes the role of interpretation in filling in the unknown elements between what can be gleaned through these sampling methods and what is lost beyond those technologies. Paleogenetists and botanists can help, but the situation necessitates interpretation.

This artwork implicitly asks what is not present when scientists attempt to recreate organisms based on limited genetic information and explores the limitations of the interpretation of genetic material based on preserved specimens alone. In this art-science work, the role of interpretation is brought to the fore on the sides of both synthetic biology and art. It also shows what is possible in art-science collaborations between different types of experts. The display of the scents always involves guesswork, since even when the scent-producing molecules are known, their exact proportions are not.

From in vitro meat created by Tissue Culture & Art to demonstrate the technical and aesthetic limitations of the technology even as companies rushed to commercialize the imagined applications of lab grown flesh, to Paul Vanouse’s Latent Figure Protocol which drew attention to the role of private labs in testing DNA samples for government agencies, the role of corporations in biotechnology have been the subject of many bioart critiques. Resurrecting the Sublime is no exception. Indeed this artwork adds questions about the way that conservation figures in a context where novel genetic material has new commercial value, and about the right to use extinct materials for profit, particularly those samples of now-extinct organisms gathered before the advent of the Nagoya Protocol on Access to Genetic Resources and the Fair and Equitable Sharing of Benefits Arising from their Utilization (ABS). These questions are interestingly complicated by the fact that Agapakis is the lead designer for Ginkgo Bioworks, a Boston-based company specializing in the creation of synthetic biology designs and scaling technologies that intends to eventually commercialize these scents.

Resurrecting the Sublime participates in a broader debate about the ways in which emerging biotechnologies can and should be used. It implicitly questions attempts to recreate other extinct species and the technical and ethical fallacies of replacement. The multiple possible fragrances the project offers suggests the difficulties of working with the limited genetic samples available from extinct organisms. Ideas about recreating an extinct organism are bound up with whether we can conceptualise a species outside its ecological niche. Through this aesthetic and accessible encounter, the project raises questions about what we lose when a species is lost and only its DNA remains. It offers us a sense of the plant through our senses, which offers visitors the bodily experience of the loss of a species.

As a step toward creating this Resurrecting the Sublime, Agapakis prototyped her ideas in a related artwork, Extinct Perfume. This piece displays three speculative aromas based on an extinct flowering plant, Hesperelaea palmeri created using conventional perfuming techniques. This prototype for Resurrecting the Sublime was shown at the Field Trial of Art’s Work in the Age of Biotechnology at the Contemporary Art Museum (CAM) in Raleigh, NC in 2017. 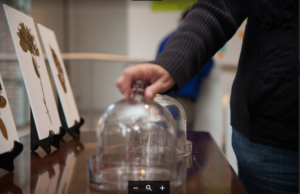 Christina Agapakis’ Extinct Perfume. Under three glass cloches are different versions of the scent of Guadalupe Island flower, which will never be smelled again. perfumes created by Symrise: Isaac Sinclair, Fanny Grau, and Maurice Roucel and scans of horticultural specimens at Art’s Work in the Age of Biotechnology at The Contemporary Art Museum in Raleigh, NC. Photo credit: York Wilson.

Exhibits in the area of biotechnology are social and political interventions. Curators must necessarily take a stance as they invite visitors into public space that is the site of interventions, be they aesthetic, social, or technical. In the case of Resurrecting the Sublime, questions are being raised about a technology many visitors are familiar with through the popularized Jurassic Park vision of the DNA sequencing of dinosaurs and recent press coverage of the Woolly Mammoth Project. Given her research in this area and work at Ginkgo Bioworks, Agapakis is at the cutting edge of her field, yet in her artwork she emphasizes conservation over the potential for synthetic biology’s application in this area. The inevitable conclusion of this work is that synthetic biology can never be enough to completely replace the lost flower’s smell. Whatever the potentials of synthetic biology, they are no replacement for conservation practices. In this way, the piece both shows what synthetic biology can do and asks what it cannot. This artwork raises the kinds of questions scholars of science and technology frequently ask: what is the status of new knowledge and how should we understand its potential benefits and challenges for society?

Artists have long been involved with genetic interventions. Edward Steichen manipulated the chromosomes of delphiniums using colchicine, a home technique for creating plant mutants which was common at the time (Curry 2016). He selected those with large inflorescences and worked on cross breeding delphiniums for more than two decades. In 1936, he debuted a display of the oversized flowers at the MoMA. Steichen simultaneously aestheticized the genetic possibilities for the delphinium, while demonstrating the democratized power of these techniques for non-scientists who could engage with genetics with a few simple tools. 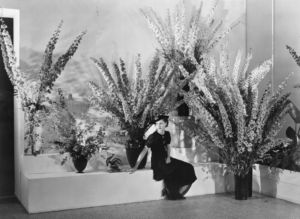 Continuing in this tradition of artistic experiments with genetics, the Art’s Work in the Age of Biotechnology Field Trial included work on genetics from bioartist Adam Zaretsky, CPNH curator and artist Rich Pell, visual artist Kirsten Stolle, School of Visual Arts’ Biodesign Challenge team, animator Jon Davis, and the musical group Cyanotype. The artworks chosen for display recontextualize genetic information by bringing it out of the lab and into everyday situations. Biotechnology and art are fascinatingly intertwined, from our aesthetic appreciation of plants and animals which brought about breeding regimens to art about ethics in the genomic age. Dimensions of both biotechnology and art are on display through this exhibit. Viewers’ perceptions of art and science shape the politics of meaning ascribed to the pieces in Art’s Work in the Age of Biotechnology.

As an STS scholar and the curator for the exhibit, I have been interested in exploring the potential of an exhibit on technology with potentially complex social and political results, while also considering the way that artworks, particularly those that involve scientific expertise or technical materials, are understood by visitors. The exhibit aimed to engage the public about the social uses (familiar and new) that this technology might offer through provocative contemporary art which dealt directly with these technologies or offered new ways of contextualizing them.

Artworks like Resurrecting the Sublime and many others to be included in the 2019 Art’s Work in the Age of Biotechnology exhibit expand conversations about how art and science—in this case genetic engineering and biotechnology—are shaped by the work of artists, scientists, and the public. This exhibition aims to provoke visitors to think about their power in relationship to genetics and how non-scientists can shape debates and intervene in the social and technical processes around biotechnological developments.

Very many thanks to all of the artists whose work appeared at CAM: Paul Vanouse, Richard Pell, Kirsten Stolle, Adam Zaretsky, John Davis, and Cyanotype; to the project team: Molly Renda, Fred Gould, Todd Kuiken, Chris Vitello, Elizabeth Pitts, Patti Mulligan, Sharon Stauffer, and particularly Christina Agapakis and Jane Calvert for their consultation in the development of this post.

Brian Howe – January 13, 2020 | The Gregg Museum’s “Art’s Work in the Age of Biotechnology: Shaping Our Genetic Futures” is less concerned with answering big questions than in finding head-spinning new ways to ask them.