Can Genetic Engineering Save Our Planet’s Biodiversity? 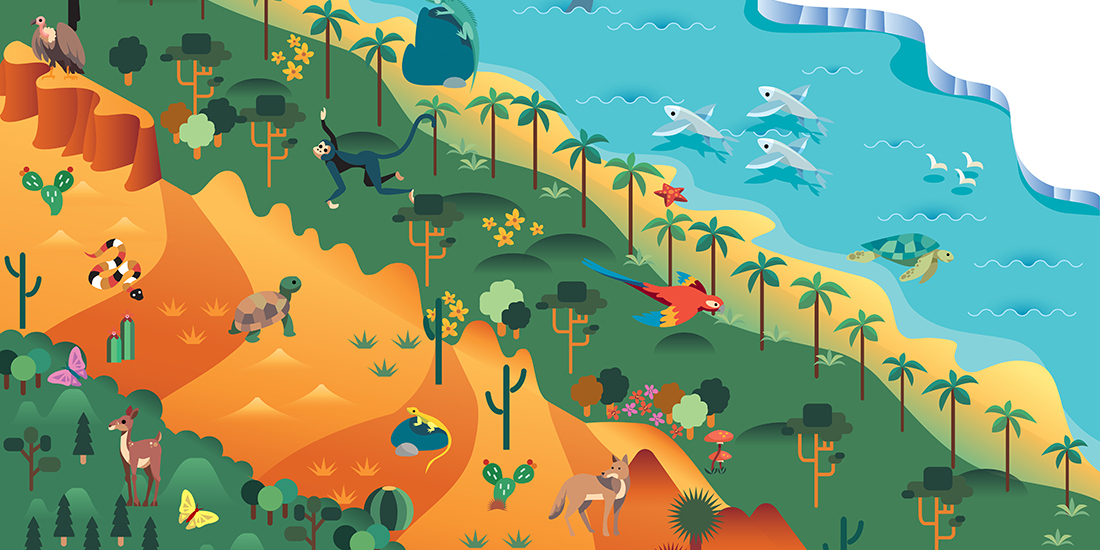 A U.N. report published last month painted a stark picture of global biodiversity loss, estimating that more than 1 million species are at risk of extinction — many of them within decades — due to farming, logging and other human activities.

While conservationists have been successful in restoring some species, such as the southern white rhino and American bison, the average risk of extinction for birds, mammals, amphibians and corals shows no sign of decreasing.

But what if it were possible to protect our planet’s biodiversity by rewriting the genetic code of plants and animals? It might sound like science fiction, but researchers at NC State’s College of Natural Resources — and around the world — are considering ways to employ genetic engineering for conservation purposes, from eradicating invasive rodents on islands to increasing the resilience of American chestnut trees to an invasive fungus.

“New tools for gene editing and strategies such as synthetic gene drives open up novel opportunities for imagining ways that we might ‘engineer’ biology beyond laboratories and agricultural fields,” said Jason Delborne, an associate professor in the Department of Forestry and Environmental Resources. “The conservation community, in particular, has begun to wrestle with whether, and how, genetic technologies might be applied to complex and challenging environmental problems.”

Delborne, who is also a research leader in the Genetic Engineering and Society Center at NC State, studies the interactions between policymakers, scientists and the public, particularly in the context of emerging biotechnologies.

Genetic engineering has potential. But every intervention has risks, so we have to consider — and anticipate — the potential impacts of these technologies and how they compare to other tools we might use.

He is also a member of the IUCN Task Force on Synthetic Biology and Biodiversity Conservation. The international group of scientists recently published an in-depth assessment of genetic engineering and its potential impacts on conservation.

We sat down with Delborne, who co-authored several of the report’s chapters, to find out all there is to know about genetic engineering, from the basics of how it works to whether or not it can actually help solve our planet’s biodiversity crisis.

A new tool for conservation

Genetic engineering is the process of manipulating or altering the genetic makeup of an organism — be it an animal, plant or a bacterium. This can be achieved by using biotechnology to remove a gene from one organism and inserting it into another, giving it the ability to express the trait encoded by that gene.

Humans have been manipulating life for thousands of years. In fact, many of today’s domesticated plants and animals are a result of selective breeding, which involves choosing organisms with desirable traits and mating them in hopes that their offspring inherit those traits. One of the best known examples is the modern dog, which was the first species to be selectively bred and domesticated by humans from Eurasian gray wolves at least 15,000 years ago.

By the mid-20th century, genetic engineering became more widely recognized as a specific and distinct field of science, with researchers not only identifying the structure of DNA but also developing methods of manipulating it.

Researchers have since developed new technologies that allow more precise and targeted changes to an organism’s DNA, such as CRISPR and other gene editing methods. These technologies also make it theoretically possible to transmit changes across an entire breeding population, even in the wild through the use of gene drives.

Gene drives are tiny snippets of DNA that have been tweaked by scientists to alter the way that certain genes (and therefore traits) are inherited. Normally, a gene has a 50-50 chance of being passed from parent to offspring. Gene drives increase that probability to upwards of 95 percent. Some conservationists are considering ways to use this technology to help protect threatened or endangered species.

Delborne, for instance, is working with an international consortium of scientists, including several other NC State researchers, to study the potential use of gene drives to eradicate invasive rodents from oceanic islands. Often brought aboard sealing and whaling ships in the 19th century, these rodents have swarmed the islands and wreaked ecological havoc by preying on ground-nesting seabirds and their eggs, some of which are threatened or endangered.

The consortium, known as the Genetic Biocontrol of Invasive Rodents program, is exploring the possibility of introducing modified mice on islands to breed with their wild counterparts, spreading a gene drive that ensures their offspring are male. The lack of females would theoretically cause an invasive population to crash over the course of several generations, but the technology is still years away from being deployed in the field.

The promises and perils of genetics

While gene drives and other biotechnologies, if appropriately designed and targeted, might be useful tools for protecting threatened or endangered species from extinction, there is not yet enough information to determine how they will actually work in the wild, according to Delborne. This has left both the public and the scientific community cautious about their use and the potential impacts they might have on nature.

One of the major and widely acknowledged concerns is that gene drives could be difficult to contain once deployed, with the movement of modified organisms potentially extending beyond the specific location of the invasive species and impacting the ecological roles played by both target and non-target species, according to Delborne. Rodents, for instance, are an invasive species and pose an ecological threat to ground-nesting seabirds on islands, but they are native to other parts of the world where they may play a beneficial role in ecosystems.

Furthermore, the use of gene drives and other biotechnologies may have socio-economic effects on production and consumption patterns and impact the cultures, rights and livelihoods of local and indigenous communities, which manage, govern, reside in or depend on a large part of the world’s biodiversity, according to Delborne. There are also regulatory uncertainties surrounding the implementation of these technologies.

I think one of the worst things we can do is conduct testing behind closed doors and then expect the public to just trust us when the time comes to deploy these technologies.

“Genetic engineering has potential. But every intervention has risks, so we have to consider — and anticipate — the potential impacts of these technologies and how they compare to other tools we might use,” Delborne said. “We also have to ask ourselves how much we care about these problems and whether or not we’re willing to take risks. And if so, what will these technologies mean to people? It’s not as simple as protecting a species. We have to think about the ways in which the use of these technologies might change how we experience the natural environment.”

In their report, Delborne and other members of the IUCN Task Force on Synthetic Biology and Biodiversity Conservation noted that gene drive research, in particular, must be contained to experimental efforts in controlled environments until scientists have sufficient data to determine what will happen in the wild. And once these technologies are ready to be deployed, their use needs to be informed by case-by-case assessments of associated risks and benefits, guided by empirical evidence and incorporating traditional knowledge, religious and ethical values in decision-making.

The authors also called for increased collaboration between conservationists and researchers to gather scientific evidence that will inform the deployment of these technologies and for regulators to obtain the informed consent of indigenous peoples and local communities before introducing gene drives into the environment.

Delborne, a social scientist, is currently focused on stakeholder engagement, fostering meaningful dialogue and deliberation between the scientists proposing these technologies and the public, including indigenous communities. He has led stakeholder workshops about the genetically engineered American chestnut tree and the use of gene drive mice for conservation.

“I think one of the worst things we can do is conduct testing behind closed doors and then expect the public to just trust us when the time comes to deploy these technologies. That’s not the best strategy,” Delborne said. “It’s much more promising to think about ways to be more transparent and to involve stakeholders along the way in conversations about the design and testing of these technologies.”

He added that the assessment will ultimately help inform a new IUCN policy on the use of synthetic biology and engineered gene drives for conservation, which the international organization will vote on during the World Conservation Congress in June 2020. While the policy itself isn’t a law, it will establish an important framework for researchers, conservationists and governments to consider in the decision-making process.

This story originally appeared on the College of Natural Resources News site at https://cnr.ncsu.edu/news/2019/06/the-future-of-conservation-can-genetic-engineering-save-our-planets-biodiversity/