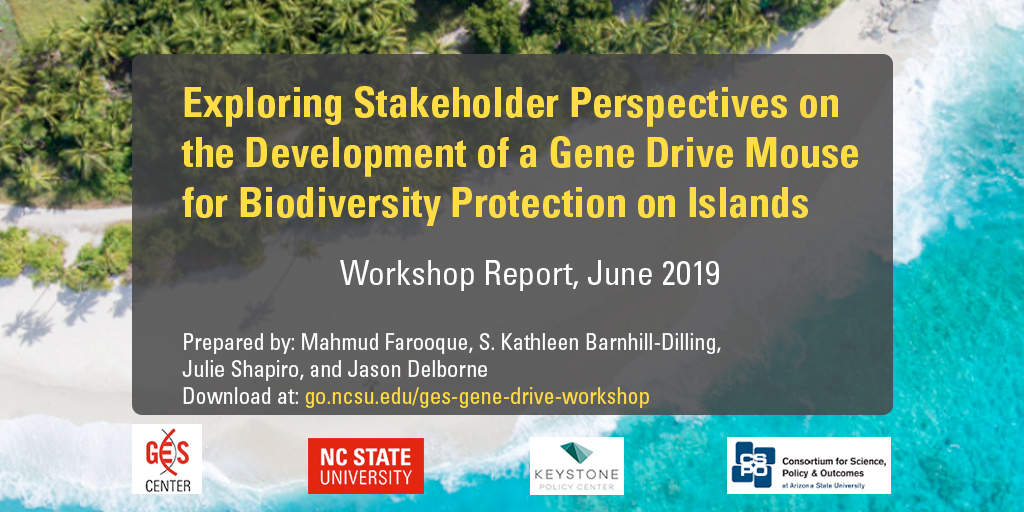 Workshop Report now online: Exploring Stakeholder Perspectives on the Development of a Gene Drive Mouse for Biodiversity Protection on Islands

Mice offer an ideal genetic model for exploring the possibility of developing a synthetic gene drive in mammals. As pests, they pose challenges to human health (through disease transmission), agricultural yields and storage, and biodiversity, especially on islands where they are not native. In line with the guidance of the National Academies of Sciences, Engineering, and Medicine report on gene drive research (NASEM, 2016), if research on gene drives in mice were to progress to a field trial, an island ecosystem would offer an additional level of physical containment. Thus, the focal application for the stakeholder landscape analysis and this workshop is the potential for developing and releasing a gene drive mouse on an island to suppress an invasive mouse population that poses a threat to biodiversity endemic to that island (e.g., nesting seabirds).

This exploration of stakeholder perspectives is intended to inform laboratory research underway to develop a gene drive mouse (through genetic engineering), creating an inheritance mechanism that biases future generations to be male (or female) only, thereby achieving invasive rodent population suppression by attrition. Both the stakeholder analysis and laboratory research are funded through the United States Defense Advanced Research Projects Agency’s (DARPA) Safe Genes program (SAFE-FP-005). Safe Genes performer teams work across three primary technical focus areas to develop tools and methodologies to control, counter, and even reverse the effects of genome editing—including gene drives—in biological systems across scales. The performer team led by NC State University was awarded support for a project entitled, “Restoring Ecosystems and Biodiversity through Development of Safe and Effective Gene Drive Technologies.” Stakeholder engagement was built into the project from its inception, and two outputs of these engagement efforts are described below.

Supported by the DARPA Safe Genes award, “Restoring Ecosystems and Biodiversity through Development of Safe and Effective Gene Drive Technologies,” Jason Delborne (Co-PI) led a collaborative effort to interview diverse stakeholders to understand the landscape of interests, values, and concerns about developing a gene drive mouse in order to protect biodiversity on ocean islands.

The findings will inform ongoing discussions and decisions by those funding and conducting research on gene drives in mice about their feasibility, safety, and social desirability. For transparency, a copy of the report is published on the website of the Genetic Engineering and Society Center, which is neither a formal member of the Safe Genes team nor the Genetic Biocontrol of Invasive Rodents (GBIRd) international partnership.

Dr. Jason Delborne, a faculty member in Forestry and Environmental Resources and the Genetic Engineering and Society Center at NC State, is a Co-Principal Investigator of this Safe Genes award. He leads the stakeholder engagement team of experts tasked with qualitatively assessing the questions—should we create this gene drive organism, and, if so, under what conditions? Other members of the stakeholder engagement team included Dr. Katie Barnhill-Dilling, who was funded as a postdoctoral researcher at NC State, and the Keystone Policy Center (primarily represented by Julie Shapiro) and Dr. Mahmud Farooque, who received financial support as consultants through the Safe Genes award to NC State. This engagement team does not take a position regarding whether or how a gene drive mouse should be developed for biodiversity conservation.

The findings will inform ongoing discussions about the governance of gene drive organisms that may one day be released in the environment. These findings will also contribute to ongoing discussions about early engagement with respect to emerging technologies. For transparency, a copy of the report is published on the website of the Genetic Engineering and Society Center, which is neither a formal member of the Safe Genes team nor the Genetic Biocontrol of Invasive Rodents (GBIRd) international partnership.

Jennifer Kuzma, June 24, 2021 | Biotech developers are concerned about the future of gene editing having experienced the contentious history of first-generation GM foods. They have also expressed desires to do better with public engagement in gene-editing innovation. The framework of Responsible Research and Innovation (RRI) may provide a way forward to act on their desires for greater public legitimacy.

« Biotechnology Oversight Gets an Early Make-Over by Trump’s White House and USDA: Part 1—The Executive Order
Can Genetic Engineering Save Our Planet’s Biodiversity? »