*Note: The opinions expressed in this article are those of the author as an individual faculty member and should not be taken as a reflection of the views of the whole of the Genetic Engineering and Society Center or NC State University.

Note: The USDA SECURE act has been finalized. For Kuzma's recent description of the final rule, which differs from the draft rule, please see her presentation at our June 5th colloquium.

An example of the Trump administration’s emerging regulatory approach for biotechnology, a new draft rule to change USDA-Animal Plant Health and Inspection Service’s (APHIS) oversight of genetically engineered (GE) plants was published in the Federal Register on June 6, 2019, just a few days before the Executive Order on Modernizing the Regulatory Framework for Agricultural Biotechnology Products.1

In a previous blog,2 I described the way USDA-APHIS has regulated GE crops and discussed the Trump administration’s recall of proposed changes to GE crop oversight that were published late in the Obama administration. To recap, under the Coordinated Framework for the Regulation of Biotechnology (CFRB), USDA-APHIS has used its legal authorities under the Federal Plant Pest Act (1957) and updated Plant Protection Act (2000) to capture GE plants that are engineered using plant-pest DNA sequences. For example, in the first couple of decades of agricultural bioengineering, the primary method to put engineered genes into plants was to use DNA sequences from Agrobacterium, a bacterium that causes tumors on plants. These DNA sequences act as chaperones, helping to insert foreign DNA into plants. However, biotechnology outpaced our oversight system around the mid-2000s, and with newer transformation methods (such as gene guns) and precise gene editing methods (such as CRISPR), plant biotechnologists no longer had to use plant-pest sequences for genetic engineering. As such, dozens of GE crops, many that are gene-edited, were exempted from USDA-APHIS’s regulation from 2010 to the present, as determined by letter inquiries to USDA-APHIS from biotech developers, “Am I Regulated?” (AIR).3

Overall, the new rule might improve the current situation in which developers of biotech crops are avoiding the use of plant-pest sequences to circumvent regulation. However, it is far from ideal.

In the final days of the Obama administration, in January 2017, USDA-APHIS proposed a change to its rules to include not only its plant-pest authorities but also its noxious weed authorities to regulate GE plants. This would have brought a “risk-based” scope to the regulation, and in my opinion, appropriately considered potential weed risks as a regulatory trigger. Demonstrated risks from the first generation of GE crops have centered around weediness (e.g. glyphosate-resistant weeds have resulted from GE herbicide-tolerant crops either due to cross-pollination with relatives or overuse of the herbicide). However, the 2017 changes would have likely expanded the number of GE crops for which the USDA-APHIS required field trials and petitions for deregulation in order to enter the market. In the new proposed rule (June 2019), USDA-APHIS states that “many (commentators) thought that the (2017) proposed requirements would be too burdensome and had the potential to stifle innovation.”4 As such, the agency withdrew the Obama proposed rule in November 2017.

Now the Trump administration is trying its own hand at regulatory reform for bioengineered crops.

USDA-APHIS has proposed an oversight process for GE crops that appears to be a significant departure from the current one (Figure 1). Below are some of the key differences.5

Features of the New Proposed Rule 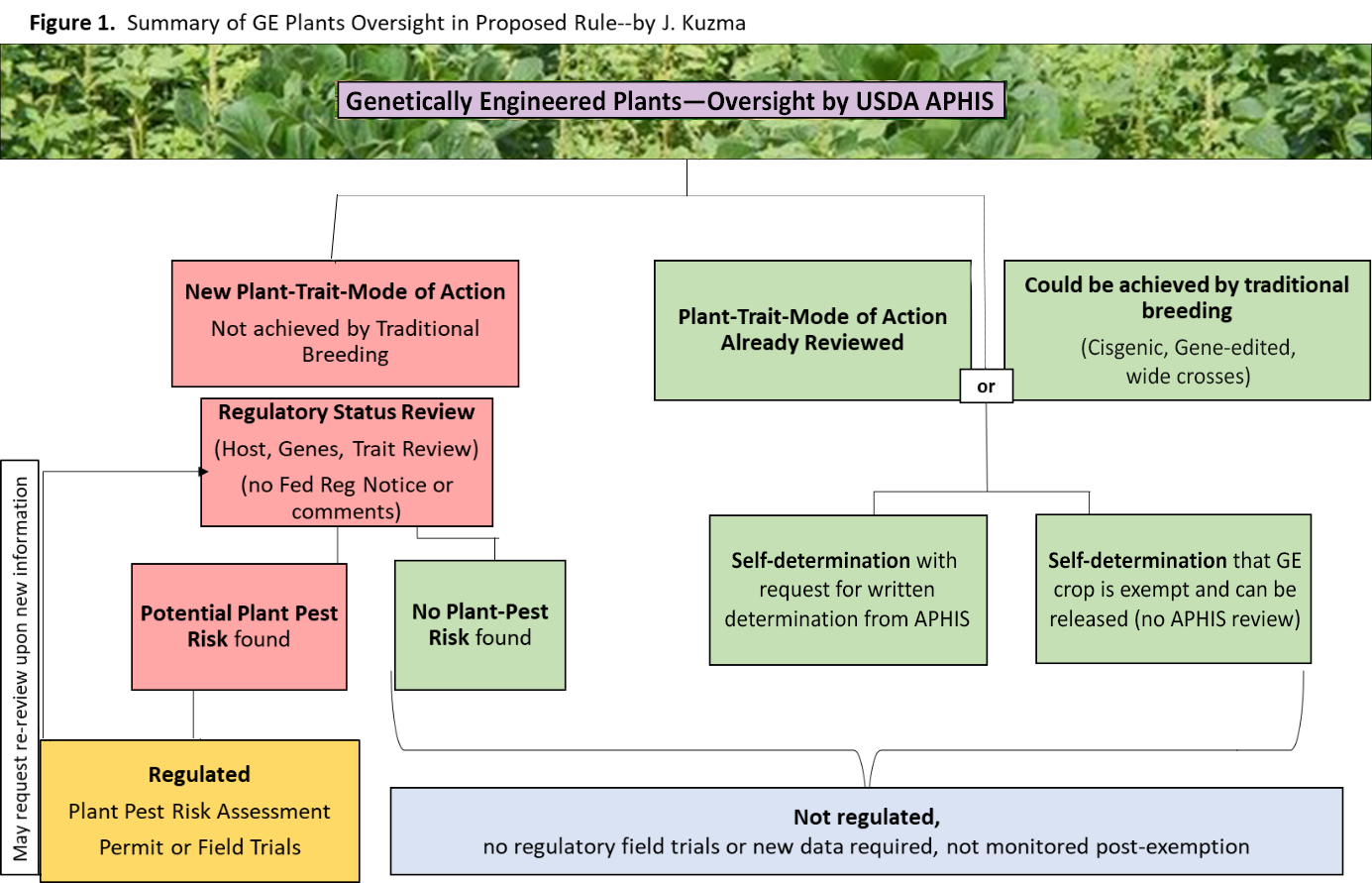 Below I summarize what I believe are a few of the strengths and weaknesses of the proposed rule.

Overall, the new rule might improve the current situation in which developers of biotech crops are avoiding the use of plant-pest sequences to circumvent regulation. However, it is far from ideal. At a minimum, transparency should be a priority to engender public trust and allow for external scientific review. The new rule should require Federal Register publication and public comment not only for permits but also for RSRs. Also, self-determinations should be recorded by USDA APHIS and placed on a public website, like the current AIR process.

A public database of bioengineered crops going through all oversight pathways will allow for public tracking so that in the event of a mishap, incidents have a chance of being identified and attributed. Such adverse events occurred with the first generation of GE crops, including the comingling of human food with unapproved GE crop varieties and environmental contamination of non-GE crops with GE crops which affected international and national markets. For example, the presence of herbicide-tolerant GE wheat in the U.S. was reported recently. GE wheat has never been approved for marketing and has not been grown in field trials in the U.S for over 10 years, but its presence in Washington state was found the very same week as the proposed rule was released, causing concern among wheat growers that they will lose export markets.15

There is a need for USDA-APHIS to take a more careful approach to the regulation of the second generation of bioengineered crops in order to avoid the public and market failures of the first. As such, the proposed rule should be amended with assurances of transparency, outside scientific review, caution under uncertainty, and post-release monitoring.

5 Note: due to space limitations, I do not discuss provisions in the proposed rule for pharmaceutical-containing GE crops, plant-incorporated-protectants in GE crops (also regulated by EPA), or plant-pests themselves (like GE insects that are plant pests). USDA discusses different pathways to regulate these products.