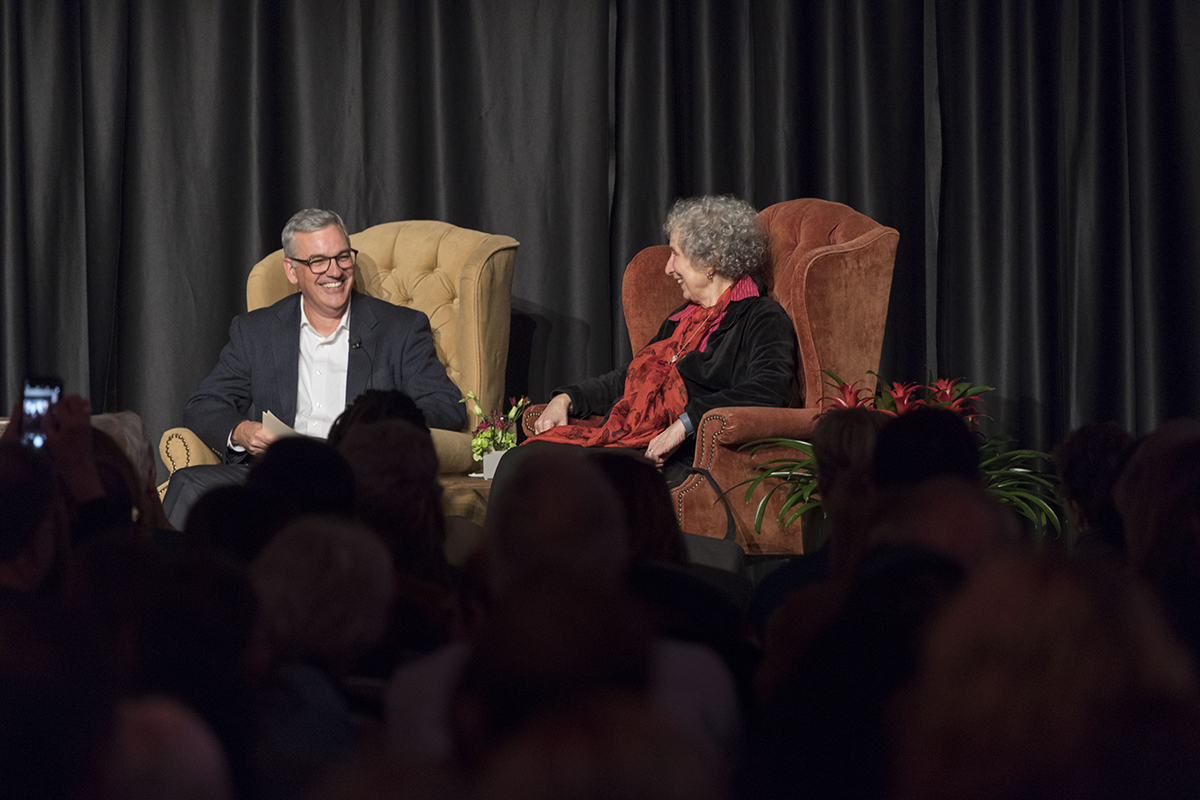 Photo by Brent Brafford, Courtesy of Friends of the Library at NC State

On Friday, Nov. 15, Margaret Atwood, the critically acclaimed dystopian novelist of “The Handmaid’s Tale” and “The Testaments,” visited Talley Student Union’s State Ballroom and discussed a plethora of issues mentioned in her 2003 award-winning novel, “Oryx and Crake.” In partnership with the Genetic Engineering and Society Center and Friends of the Library at NC State, Atwood examined the implications of new technologies like genetic manipulation, as well as the dangers of climate change and corporate domination on our society.

The evening began at 6 p.m. with an exciting welcome from Jennifer Kuzma, co-director of the Genetic Engineering and Society Center. Kuzma said the mission of the Genetic Engineering and Society Center was to guide biotechnologies in responsible and sustainable ways. She stressed the importance of integrating social sciences, natural sciences, engineering and the humanities to tackle these issues and hold each other accountable for possible misuse of the new technologies.

Afterwards, Greg Rashke, senior vice provost and director of libraries, introduced Margaret Atwood, who turned 80 on Monday, Nov. 18, to a crowd of over 1,000. Naturally, Atwood was greeted with an enormous standing ovation while she took her place in front of the podium.

“Thank you very much,” Atwood said to the standing crowd. “I’m not the queen, but I can do a pretty good imitation.”

Before she started her speech, Atwood told the crowd she is not an expert on ethics, genetics or the future. In addition, she announced “Oryx and Crake” had just appeared on the British Broadcasting Company’s list of “100 Novels That Shaped Our World.” She admitted she was quite surprised by this honor, saying “The Handmaid’s Tale” and “The Testament” were more influential, especially in the realm of clothing.

“[It] generated not only some very TV-effective costumes for protesting the rollback of women’s rights, but also very briefly a sexy handmaid’s outfit for Halloween that disappeared admit howls of outraged disbelief,” Atwood joked.

However, Atwood said the acclaim for “Oryx and Crake” was a good thing, but it was not a good thing that the novel was being called “prophetic.”

Atwood began to discuss contemporary issues and developments in our society that are present in “Oryx and Crake,” like the expansion of genetic alteration, CRISPR technology, climate change and environmental extinction. She said the extinction rebellion movement seems to be a bipartisan effort.

“It is perhaps dawning on them that a world containing nothing but money will render money useless, as there will no longer be any food, fresh water or oxygen left that you can buy with your hard cash,” Atwood said. “And by the way, you can’t eat Bitcoins.”

She also told the crowd to send a copy of “Oryx and Crake” to each of their congressmen with the message: “Get cracking on the climate crisis and plastic in the ocean,” or else the dystopian world present in the novel may become reality.

Although the scientific technology mentioned has many disadvantages, Atwood recognizes there are also many advantages to these inventions, like creating new plant species that are more drought-resistant to prevent food shortages. But Atwood also stressed the main question of her novel: What if we continue the road we already are on? How slippery is this slope? What are our saving graces? Who’s got the will to stop us?

“Writers write about what worries them, and the world of “Oryx and Crake” is what worries me right now,” Atwood said. “It’s not a question of our inventions. All human inventions are merely tools, but what might be done with them?”

However, Atwood said there are current technological developments that are directed to environmental improvements rather than digging a deeper hole. For example, she mentioned the Dutch have created an effective method of cleaning up the plastic garbage in the ocean, the discovery that milkweed fluff is effective in cleaning up oil spills rather than the use of chemicals, and the legalization of hemp in certain states will bring back the use of hemp for fabrics, papers and foods.

Atwood also said the increasing education of women not only contributes greatly to the GNP of any country, but is also carbon positive.

“There is always hope,” Atwood said. “With hope, people will make an effort. An effort is what we will need to make. The good news is that there is still time; the bad news is we are running out of it. Be advised accordingly.”

All of the questions were curated beforehand by Harwood and Booker. The NC State and Raleigh community also had a chance to submit questions via Twitter.

During the Q&A session, Atwood gave the crowd a glimpse into her writing process, saying she writes everything first and then researches all of the concepts after to see if she got them correct.

She once again stressed the importance of dialing back the use of chemicals and plastics as well as the significance of investing in education and valuing regulation. However, she also said society should value the responsible stewardship of science, technology and the environment.

“We should value it; it’s just kind of hard to enforce it,” Atwood said. “It’s just so tempting to do new things and make something new. Who’s going to do the regulation? Who’s going to be in charge of this? … How much say will those people have in what is actually being done?”

To learn more about the Genetic Engineering and Society Center and the Friends of the Library at NC State, visit their websites. To watch the full conversation with Margaret Atwood, visit the livestream.

This story originally appeared on the Technician at http://www.technicianonline.com/arts_entertainment/

« CALS Spotlight on Fred Gould: How Do We Communicate Genetic Engineering?
Margaret Atwood and the Biotechnology of Tomorrow »