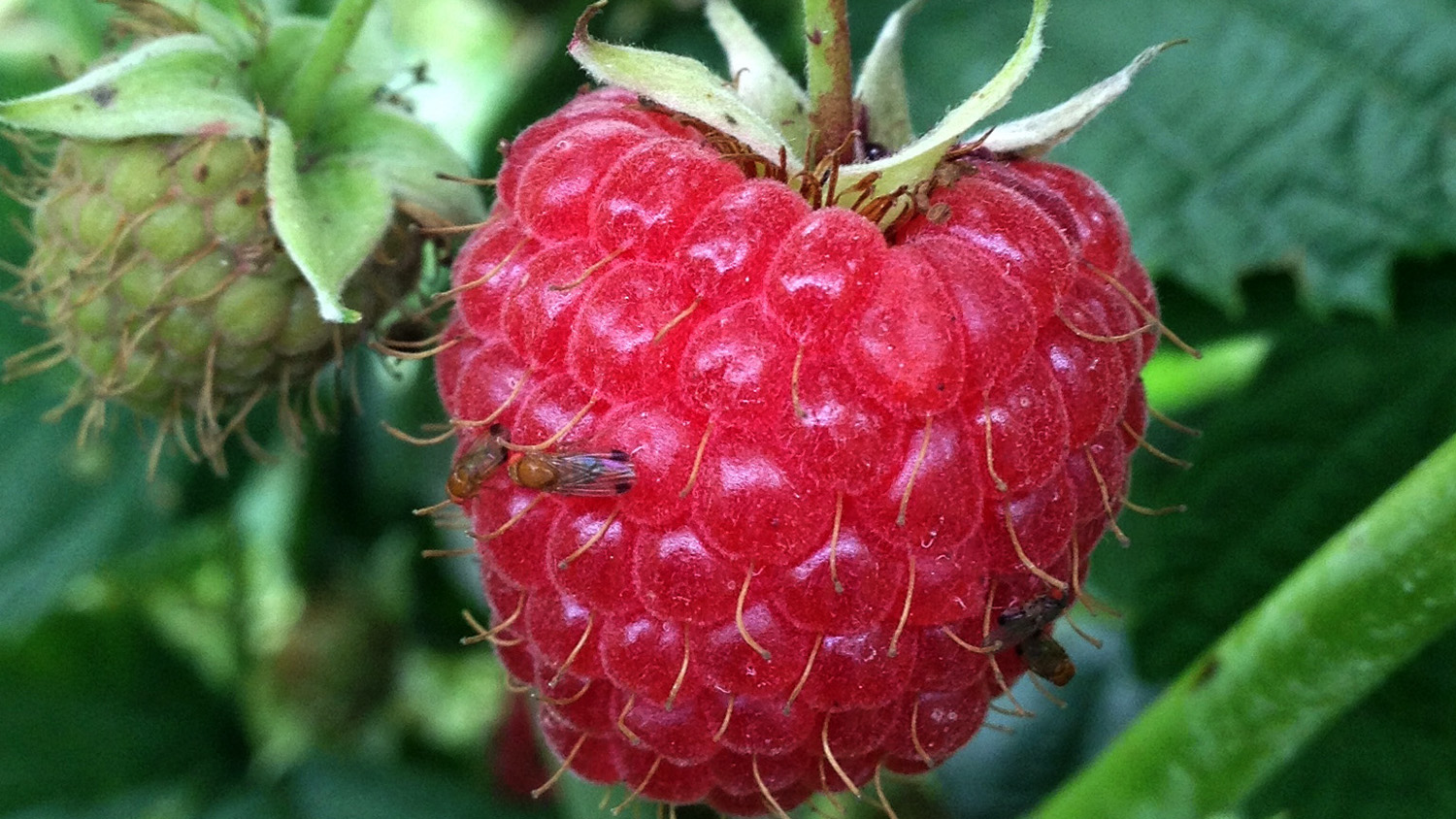 A recent study finds that the invasive spotted wing drosophila (Drosophila suzukii) prefers to lay its eggs in places that no other spotted wing flies have visited. The finding raises questions about how the flies can tell whether a piece of fruit is virgin territory – and what that might mean for pest control.

D. suzukii is a fruit fly that is native to east Asia, but has spread rapidly across North America, South America, Africa and Europe over the past 10-15 years. The pest species prefers to lay its eggs in ripe fruit, which poses problems for fruit growers, since consumers don’t want to buy infested fruit.

To avoid consumer rejection, there are extensive measures in place to avoid infestation, and to prevent infested fruit from reaching the marketplace.

“Ultimately, we’re talking about hundreds of millions of dollars in potential crop losses and increases in pest-management costs each year in the United States,” says Hannah Burrack, co-author of a paper on the study and a professor of entomology at North Carolina State University. “These costs have driven some small growers out of business.

“The first step toward addressing an invasive pest species is understanding it. And two fundamental questions that we had are: Which plants will this species attack? And why does it pick those plants?”

One of the things that researchers noticed when observing infestations on farms was that the species’ egg-laying behavior was different, depending on the size of the infestation.

To better understand the egg-laying behavior of D. suzukii, the researchers conducted a series of experiments. And the results surprised them.

Specifically, the researchers found that, given a choice, female D. suzukii preferred to lay their eggs in fruit that other flies had never visited.

“We’re not sure if the flies leave behind a chemical or bacterial marker, or something else entirely – but the flies can tell where other flies have been.”

The researchers say that the next step is to determine what, exactly, the D. suzukii are detecting.

“If we can get a better understanding of what drives the behavior of this species, that could inform the development of new pest-control techniques,” Burrack says. “We’re not making any promises, but this is a significant crop pest – and the more we know, the better.”

The paper, “Social signals mediate oviposition site selection in Drosophila suzukii,” is published in the journal Scientific Reports. Corresponding author of the paper is Johanna Elsensohn, who did the work while completing her Ph.D. at NC State. The paper was co-authored by Marwa F. K. Aly, a faculty member of Minia University, and Coby Schal, the Blanton J. Whitmire Distinguished Professor of Entomology at NC State.

The work was done with support from: the U.S. Department of Agriculture National Institute of Food and Agriculture’s Organic Agriculture Research and Extension Initiative, under grants 2018-02859 and 2015-07403; USDA’s Animal and Plant Health Inspection Service, under cooperative agreement 17-8130-0194-CA; National Science Foundation Integrated Graduate Education and Research Training grant number 1068676; and an Egyptian government scholarship to Aly.

Abstract: The information that female insects perceive and use during oviposition site selection is complex and varies by species and ecological niche. Even in relatively unexploited niches, females interact directly and indirectly with conspecifics at oviposition sites. These interactions can take the form of host marking and re-assessment of prior oviposition sites during the decision-making process. Considerable research has focused on the niche breadth and host preference of the polyphagous invasive pest Drosophila suzukii Matsumura (Diptera: Drosophilidae), but little information exists on how conspecific signals modulate oviposition behavior. We investigated three layers of social information that female D. suzukii may use in oviposition site selection – 1) pre-existing egg density, 2) pre-existing larval occupation, and 3) host marking by adults. We found that the presence of larvae and host marking, but not egg density, influenced oviposition behavior and that the two factors interacted over time. Adult marking appeared to deter oviposition only in the presence of an unmarked substrate. These results are the first behavioral evidence for a host marking pheromone in a species of Drosophila. These findings may also help elucidate D. suzukii infestation and preference patterns within crop fields and natural areas.

This story originally appeared in NC State News at https://news.ncsu.edu/2021/02/d-suzukii-untouched-fruit/

Can Genetic Engineering Save Our Planet’s Biodiversity?

Andrew Moore, June 24, 2019 | Researchers at NC State’s College of Natural Resources — and around the world — are considering ways to employ genetic engineering for conservation.