Blog: Considerations for developing GMO crops around the world

*Note: The opinions expressed in this article are those of the authors as individuals and should not be taken as a reflection of the views of the whole of the Genetic Engineering and Society Center or NC State University.

Agriculture is changing and so are the technologies needed to improve it. Scientists should be allowed to develop genetically modified (GM) crops to provide options for smallholder farmers who depend on a successful harvest for their livelihood.

That position was highlighted in a panel discussion featuring biotechnology leaders at the Genetics Engineering and Society colloquium organized by the third cohort of the AgBioFEWs fellowship. The question that informed this colloquium was, who makes the decision on which GM crops are developed around the world?

The decision to develop Bt brinjal (eggplant) in Bangladesh was based on demand by local stakeholders and the experiences of smallholder farmers, said panelist Arif Hossain, CEO of Farming Future Bangladesh. “For a long time, farmers struggled to control insect devastation on brinjal, and they incurred up to 70 percent loss in yield even with frequent spraying.”

Scientists ventured into using Bt technology to develop brinjal crops that are resistant to the fruit and shoot borer pest when other control methods proved difficult. Since Bangladesh first adopted Bt brinjal in 2014, farmers have recorded a 20 percent increase in yield compared to conventional varieties. Studies also have shown that the Bt brinjal significantly increased income of farmers. This is huge benefit because brinjal, one of most popular vegetables in Bangladesh, a is major source of income for many smallholder farmers.

“It was opportune to have a favorable government in place which facilitated the development and adoption of Bt brinjal,” Hossain said.  “The Bangladeshi government is trying to promote technological advancement and commercialization of agriculture, and without the use of biotechnology, smallholder farmers in the next generation may not survive in the field.”

“The decision-making process for developing GM crops in my institution involves the priorities of the communities we work in,” said Dr. Marc Ghislain, global leader of the biotechnology research program at the International Potato Center (CIP) in Nairobi, Kenya.  “Before deploying any technology, we consult stakeholders in the Ministry of Agriculture, agencies, local stakeholders and the farmers to ensure our solution will be more sustainable than the existing one.”

Ghislain’s work involves the development and release of a transgenic potato that is completely resistant to late blight in sub-Saharan African countries. The potato leaf blight disease, which led to the famine that decimated the Irish population in the 1840s, is still a major constraint in potato production in Africa, causing up to 60 percent loss in yield. So far, the only effective way to control this disease is by using fungicide, which can get expensive and present environmental and health hazards to smallholder farmers.

“Using GM technology, pesticide use can be reduced significantly, yield can be increased and at the small-scale, farmers in developing countries can benefit from this technology,” Ghislain said. 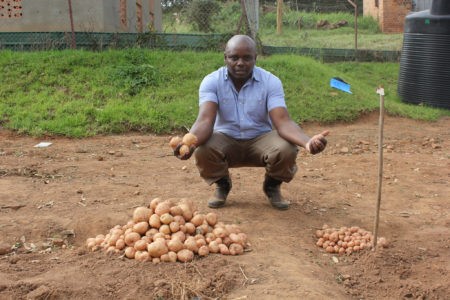 So far, the potato leaf blight resistance trial has shown promising results, Ghislain noted as he displayed photo showing side-by-side harvests of GM and non-GM potatoes. Even without any fungicide application, the disease-resistant GM yielded more than the conventional variety currently grown by most farmers. The results offer hope for African farmers, he said.

“The GM variety will reduce their cost of inputs and improve their health, as well as provide more income for smallholder farmers who depend on the crop for their livelihood,” he explained.

What about ethical considerations?

When a new technology is introduced in agriculture, it potentially increases efficiency, said Dr. Paul Thompson, W.K. Kellogg Chair in Agricultural, Food and Community Ethics at Michigan State University. However, this comes with layers of ethical issues. They include questions about on who benefits in the long term, what consideration is given to those who may incur losses from the technology and how ag innovations interact with structural injustices, cultural ideas on heredity and racial identities rooted in agriculture and breeding.

While many may say that the benefit of genetic engineering outweighs the risks, agricultural scientists need to engage in discussions on these ethical considerations, he continued. “Engagement and communicating about this technology should include an approach that connects consumers to scientists and policy makers and should answer pertinent questions on ethics.”

Panelists agreed that while the agricultural biotechnology community has been more focused on crop development and technological solutions, institutional biosafety committees in various countries should be strengthened to evaluate the ethical considerations involved in the development and adoption of these technologies. That brings in the uniqueness and in-country capacity of various countries with regards to technology adoption, they said.

Concluding his thoughts at the colloquium, Hossain said most smallholder farmers can’t compromise on their yield because their farm is their sole source of income, as well as providing food for their families. Whether a crop is GM is always a secondary consideration, he said. Their first consideration is whether they’re getting an adequate return on their investment.

While the technology may be old in developed countries, it is still new for most people in developing countries, Hossain observed.

“Scientists should be allowed to develop these crops in order to provide options for farmers to improve the food and economic situation of people in various communities,” he said.

Modesta N. Abugu is an AgBioFEWS Fellow, a genetics and genomics scholar and a PhD student in the Horticultural Science department, NCSU. She works in the Sweetpotato breeding and genetics breeding program under the supervision of Drs. Craig Yencho and Massimo Iorrizo. She is passionate about science communication especially on how biotechnology can be used to improve food and nutrition security in developing countries.  She can be reached at mnabugu@ncsu.edu

End of semester gathering for all AgBioFEWS Cohorts at the Agroecology Education Farm, with AEF Farm Manager Alison Reeves. Arrive by 3 PM for a tour of the farm. Food and beverages provided.

IN-PERSON COLLOQUIUM. Revive & Restore’s “Intended Consequences” initiative aims at rebalancing the risk-benefit equation around the use of biotechnologies in conservation practices.

Statement regarding cancellation of the upcoming Colloquium on March 29, Panel: Narratives and Storytelling in the Public Communication of Science and Technology