Plant Science Pioneer Fights Late Blight of the Past and Future

Jean Ristaino has made history by tracking late blight’s origins, and she is making history again by fighting future late blight outbreaks as a scientist with the N.C. Plant Sciences Initiative. 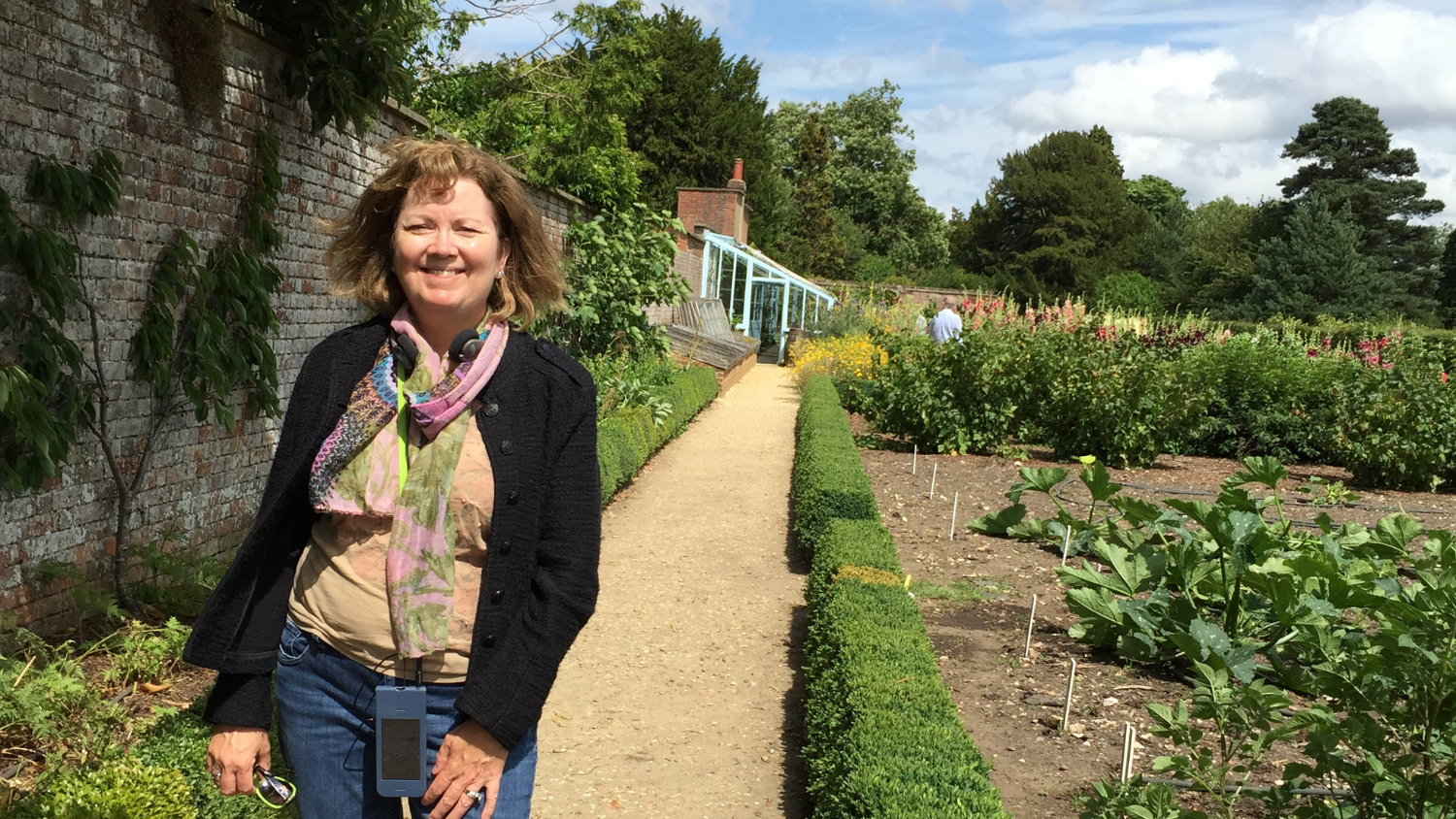 Dr. Jean Ristaino stands next to potato plots in the backyard of Down House, Charles Darwin’s home.

Late blight, a disease of potatoes and tomatoes, caused one of the most significant events in history: the Irish Potato Famine, which led to nearly 1 million deaths in Ireland – and another 1 million Irish citizens to exit their country to search for a better life.

Jean Ristaino has an obsession with late blight and with its history – so much so that she has been dubbed by colleagues as the “Sherlock of Spuds.” She found original famine-era plant samples and used them to genetically track late blight, as well as understand its evolution. In doing so, she made history as a pioneer in plant pathology by becoming the first plant pathologist to analyze DNA from centuries-old herbarium samples.

Using these same herbarium samples – and other information connected to them, this William Neal Reynolds Distinguished Professor in Entomology and Plant Pathology became one of the first scientists to genetically track and map a plant disease pandemic. Her work shed light on late blight’s genetic evolution and origins, upending popular theories in the process.

Now Ristaino is making history again – with an eye toward fighting late blight pandemics of the present and future.

Ristaino is a lead investigator for the N.C. Plant Sciences Initiative (N.C. PSI), which is advancing agriculture through innovative, interdisciplinary research meant to solve some of the most challenging issues facing agriculture and the world today.

She submitted her project, called Plant-Aid, for review to the GRIP 4 PSI program and was selected to be one of the first funded projects in the Plant Sciences Building. The GRIP 4 PSI program was designed to support visionary ideas that lead to large-scale funding, impact future research, and foster hands-on interdisciplinary graduate education and training.

Together with her interdisciplinary team of researchers and graduate students, she is developing next-generation systems that will allow growers to discover, track, and stop late blight before it has a chance to spread in the field – even before the disease is visible to the naked eye.

For Women’s History Month, we track the evolution of Ristaino’s research to uncover how she and her colleagues are tackling the past, present, and future of late blight.

Before Ristaino majored in biology as an undergraduate, she majored in history. But as she tended toward plant pathology, she couldn’t quite escape that love for events of the past.

“Even when I studied plant pathology, I still had an interest in the historic side of it. I was especially fascinated with the late blight pandemic that caused the Irish Potato Famine; it led to the founding of plant pathology” says Ristaino. “My father also always talked about his Irish ancestry, and I was fascinated by the destruction this plant disease caused in Ireland.”

Ristaino found a way to connect her obsessions with plant pathology and history in 1984. Between her master’s and Ph.D. degrees, she worked at the USDA-ARS facility in Beltsville, Maryland. There she worked as a researcher in a biocontrol lab on soilborne plant pathogens of potato. There Ristaino met another researcher, Dr. Amy Rossman, who was director of the mycological herbarium in the building.

“I kind of discovered herbaria through Amy,” says Ristaino. “One way that 19th century mycologists would fund their research was by collecting the leaves of diseased plants, lots of different diseases. Their books, known as exiscatti, were full of dried plant leaves that contained plant pathogens. They’d sell them to different universities to fund their programs.”

To Ristaino, this library of diseased plant samples was a tangible connection to the history of pandemics from the past.

“Plant scientists were mainly using herbaria for taxonomy,” Ristaino says. “But mycologists used them to provide samples for disease reporting.”

And as a budding expert in plant disease genetics, Ristaino saw these samples as a potential source of DNA for studying plant diseases.

“I really kept thinking about them,” says Ristaino. “I finally took a sabbatical back in 1997 and went to three mycological herbaria to sample their collections and track the Irish late blight outbreak: the USDA herbarium in Beltsville, the Farlow Herbarium at Harvard, and the the Royal Botanic Gardens herbarium at Kew in the U.K.”

With this, at the age of 44, Ristaino became the first plant pathologist in history to identify a pathogen strain from historic herbarium specimens. Interviews soon followed on NPR and CNN.

Later Ristaino would go on to track the pathogen’s changes in virulence over time, comparing U.S. and European strains that she named “Fam-1.”

But Ristaino also wanted to track the source of Ireland’s late blight outbreak. She was one of the researchers on a team that fully sequenced the historic pathogen’s whole genome at Harvard’s Broad Institute.

With the entire genome mapped, Ristaino returned to the herbaria samples to track its global spread. She and colleagues from the University of Copenhagen found the pathogen’s genes had shared ancestry in South America, where potatoes were first cultivated by civilization.

She also turned to the information tags associated with each sample.

“All the specimens in mycological herbaria have labels, which is useful information,” says Ristaino. “These archival collections show the host species name, origin and location; what was collected, and who collected it. That’s important metadata we can digitize and use for tracking.” 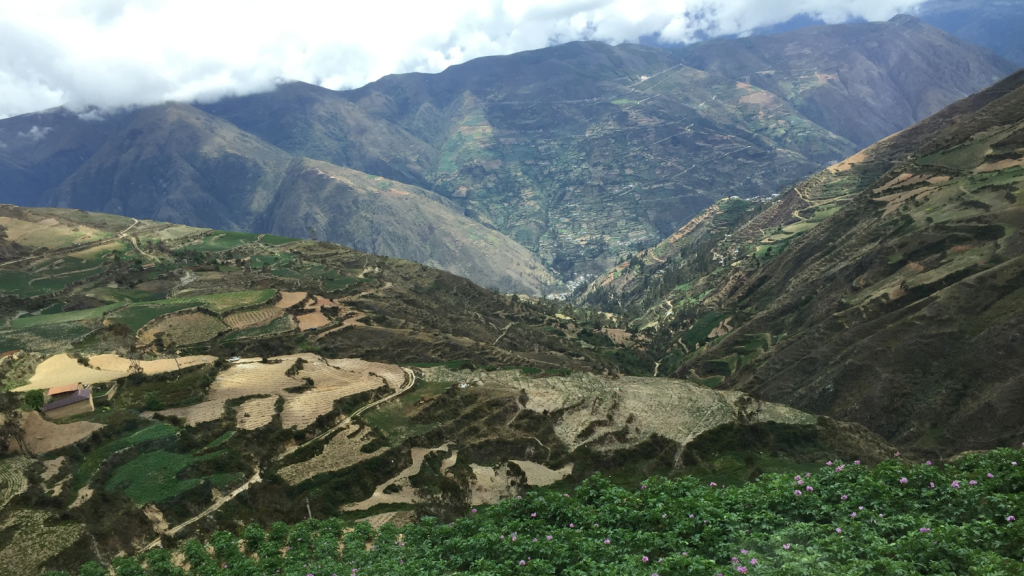 “We created a map with a paper I published called ‘The Importance of Mycological and Plant Herbaria in Tracking Plant Killers.’ We created a map of late blight outbreaks just like you’d map a disease today.”

After 12 years, Ristaino and her colleagues ultimately tracked the Phytophthora infestans strains to sister lineages in the Andean Region of South America.

“It came from the tubers themselves,” says Ristaino. “Potatoes were being imported to Europe in the mid-1800s to replenish potatoes in England, Ireland and Europe. Their potatoes had a fusarium dry rot problem, and they knew their seed was degrading; so they were bringing new potato tubers in from Peru.”

“I examined ship records. Ships were coming north from Peru and from South America with not only potatoes, but bat guano as fertilizer to improve their growth. And so we suspect the pathogen came from infected tubers. Then some of those tubers were used for planting. They were first planted in the U.S. in 1843, where outbreaks occurred first.” Conditions were conducive, and the disease started spreading in the north east area.”

Late blight appeared on a wide scale in Europe and Ireland in 1845, likely from seed sources from both the U.S. and South America.

Ristaino says that, over the years, her molecular data helped prove that the closest ancestral pathogen lineages were found in South America, suggesting that the disease not only emerged from there; but that it was likely the center of origin itself.

Other plant pathologists immediately challenged Ristaino’s findings, but she continued to argue her case.

“I have a whole file cabinet of back and forth arguments with editors and reviewers of journals, articles, and grants,” says Ristaino. “I’ve persisted with interpreting the data from these archival samples, which only one other lab did. They validated my original identification of the famine lineage. Everybody else was studying modern epidemics and making inferences to the past.”

Over time, Ristaino found additional evidence to strengthen her theory.

“Our data continually supports a South American origin, and our data also supports that a different lineage caused the famine than the one originally proposed based on modern day sampling. We identified the actual lineage contrary to popular belief.”

Preventing pandemics of the future

In 2015, Ristaino recruited a new team of colleagues and graduate students across CALS, NC State’s College of Engineering and the Center for Geospatial Analytics to work on emerging plant diseases affecting global food security. She and some of this team will work in the new Plant Sciences building.

“The system will eventually allow growers to identify and treat diseases before they have a chance to spread – even before symptoms are visible in the field,” says Ristaino.

The system starts with special in-field sensors that can detect volatiles, or scented biochemical compounds emitted by plants as they react to stressors like plant disease.

“Volatiles are the way plants communicate when they’re sick or threatened,” says Ristaino. “It’s how you might say, ‘I don’t feel so good’ to others before you get visibly sick.”

Once a sensor detects these volatiles, an alert is communicated to the Plant-Aid database, which collects and maps real time data on the sensor’s location(s), the plant disease(s) detected, and other vital information that can help users understand the conditions for the disease, such as soil moisture and climate.

Next, an individual finds and visits the location of interest with a portable testing platform that includes a sample collection using a cluster of microneedles to collect DNA. Using a rapid and highly accurate diagnostic method, called LAMP, users can identify specific disease infections within 15 minutes and report them through the Plant-Aid database app on their smartphones.

Once a disease is verified on site through the diagnostic tools, users can verify the disease in the Plant-Aid database. Once verified, Plant-Aid would register the disease on a map of that field – and provide possible mitigation strategies to the grower – all before symptoms are even visible to the naked eye.

The Plant-Aid database, still under development, will soon interface with USABlight, a much larger national surveillance network for late blight found on potato and tomato crops. Ristaino also leads this network, which has been managed and updated by 25 plant pathologists across the United States over the past 10 years.

“The ultimate goal of these plant disease surveillance networks is to help growers manage diseases better,” says Ristaino. “Growers might use this information to strategically deploy fungicide treatments, use disease-resistant cultivars or remove infected plants altogether in order to prevent late blight’s spread.”

Ristaino says that surveillance systems like Plant-Aid and USABlight are tied to national security.

“National security and food security are tightly linked,” says Ristaino. “When late blight struck Ireland, famine emerged, and millions left for other countries.  “Reducing diseases of potatoes, which feed millions around the world, is relevant not only to the past but in the present.”