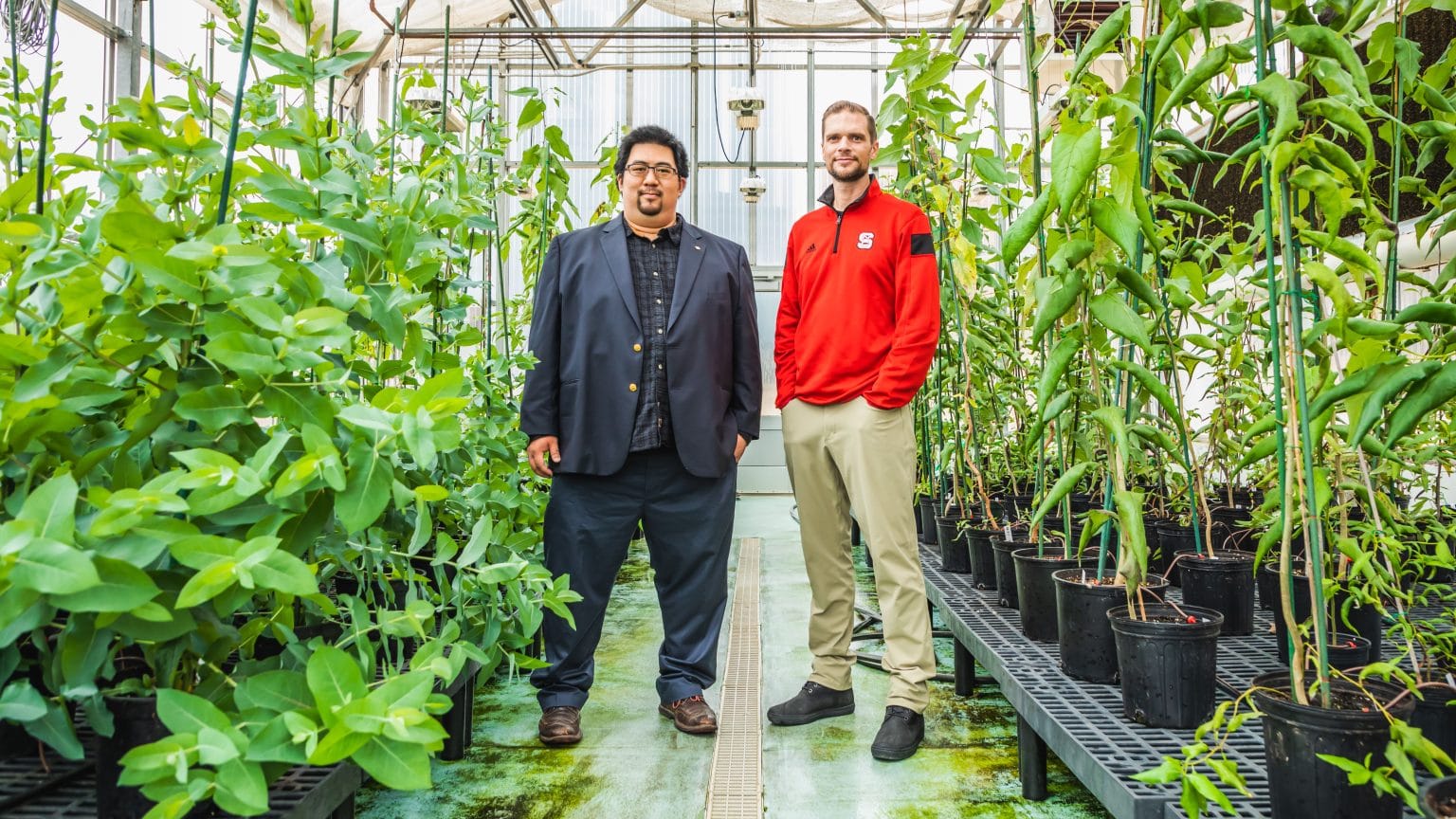 The world’s largest and most advanced collection of gene-edited wood presumably lives on Centennial Campus at North Carolina State University.

Stacked on shelves in a corner closet of the Forest Biotech Group’s lab, these bundles of sticks sit mere feet from the incubation freezers that contain the tree stem cells they started out as. Directly across the hall, you’ll find Rodolphe Barrangou’s CRISPR Lab — where some of today’s most cutting-edge CRISPR research with food and nutrition applications is being done.

TreeCo — a startup founded by Jack Wang, director of the Forest Biotech Group, and Barrangou, the Todd R. Klaenhammer Distinguished Professor of Food, Bioprocessing and Nutrition Sciences — performs much of their research in those two labs and a few greenhouses just outside the building.

“We focus on combining tree-genetic insights with the power of genome editing to breed healthier forests and a more sustainable future,” says Wang, who’s also an assistant professor in the Department of Forestry and Environmental Resources.

It only makes sense that a research startup like TreeCo would have roots at NC State — home to one of the first schools of forestry in the nation.

“The idea of translating decades of basic foundational research into something that could be impactful in the real world is just tremendously exciting,” Wang says.

Thanks in large part to support from the Chancellor’s Innovation Fund (CIF), TreeCo has grown quickly — almost as quickly as the Poplars, Loblolly pines and Eucalyptus trees they’ve been experimenting with. 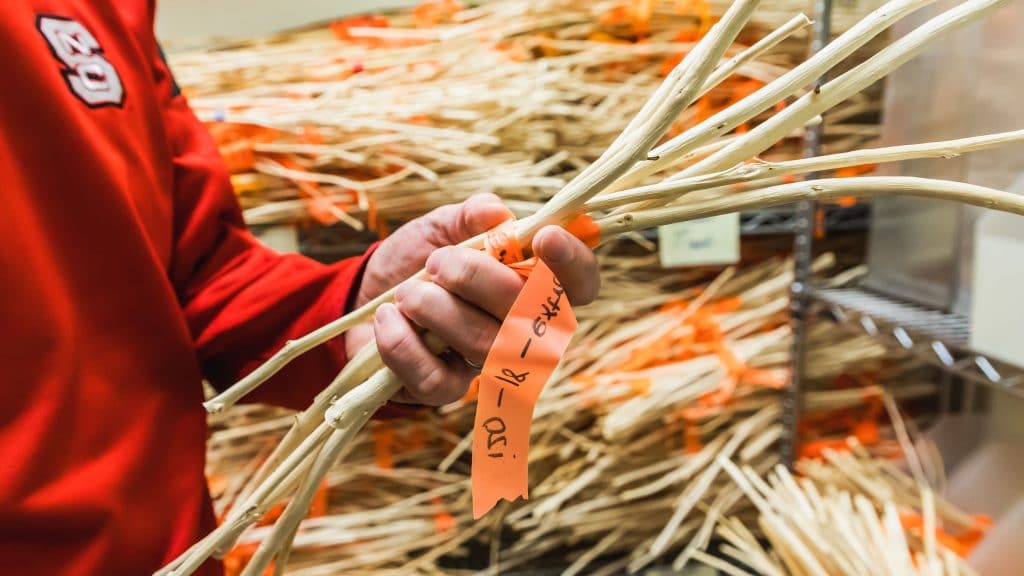 By using CRISPR to edit select genes, TreeCo is able to create cultivars that can cut the growing cycle from years or decades to as little as 12 months — and achieve a number of other desired enhancements, such as better drought or frost tolerance, for example. More importantly, using DNA-free CRISPR technology means that the trees produced are natural; that is, they are not considered genetically modified organisms (GMOs).

“We’re not using DNA to edit DNA inside the trees,” Wang says. “That’s a very exciting technology that has a whole host of benefits down the road.”

TreeCo’s technology opens the door for a number of tactics to mitigate climate change. Not only could it help grow trees faster — or that are more resilient to less predictable weather patterns — but it could also help meet the rising demand for biofuels, plastic alternatives, and sustainably manufactured textiles and paper.

“When we change and optimize the biochemical composition of those trees, we make that operation more efficient,” says Barrangou, who’s considered a pioneer in the CRISPR field. “It would take fewer resources and less energy to run the same manufacturing plant.”

Barrangou says they’re working to produce the world’s first genome-edited pulp and paper — the production mills for which are well-known sources of pollution and “energetic inefficiencies.”

Wang says they also focus on the emerging markets of sustainable bioenergy and bioproducts — by testing traits that could lead to the more efficient production of green chemicals and fuels, or feedstocks that are better-suited for lignin-based fiber materials and other nano-cellulosic plastic alternatives.

Through innovations like these along with the potential to breed forests faster and healthier, TreeCo hopes to offer many opportunities to contribute to the overall reduction of our carbon footprint.

“Sustainability is paramount in today’s world,” Barrangou says. “And breeding healthier trees for a more sustainable forestry enterprise is one of the greatest goals that we can aspire to — but at the same time, a very daunting challenge lies ahead of us.”

Where They Are Now

Barrangou says that, realistically, some of the things they’re working on today “won’t actually fully come into fruition until 2046.”

“It will take years — in some cases a couple of decades — to fully illustrate the benefits that can be reaped,” Barrangou says.

However, they have made plenty of progress in just a few years. Namely, Wang and Barrangou say they’ve proven they can successfully perform “multiplex genome editing” — that is, target multiple genes simultaneously — in multiple tree species. 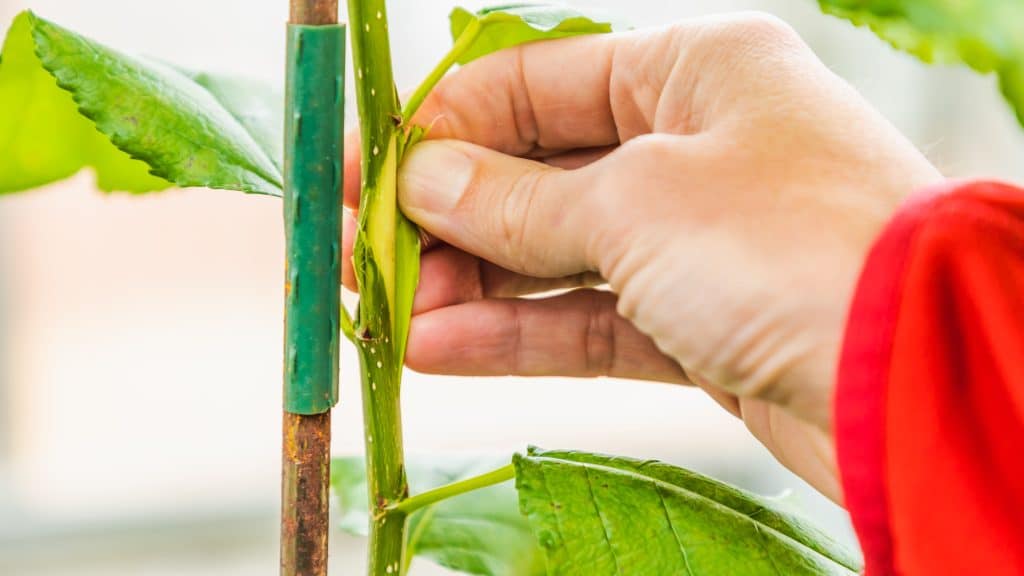 This Poplar in a control group has a greenish-yellow xylem, or inner stem. 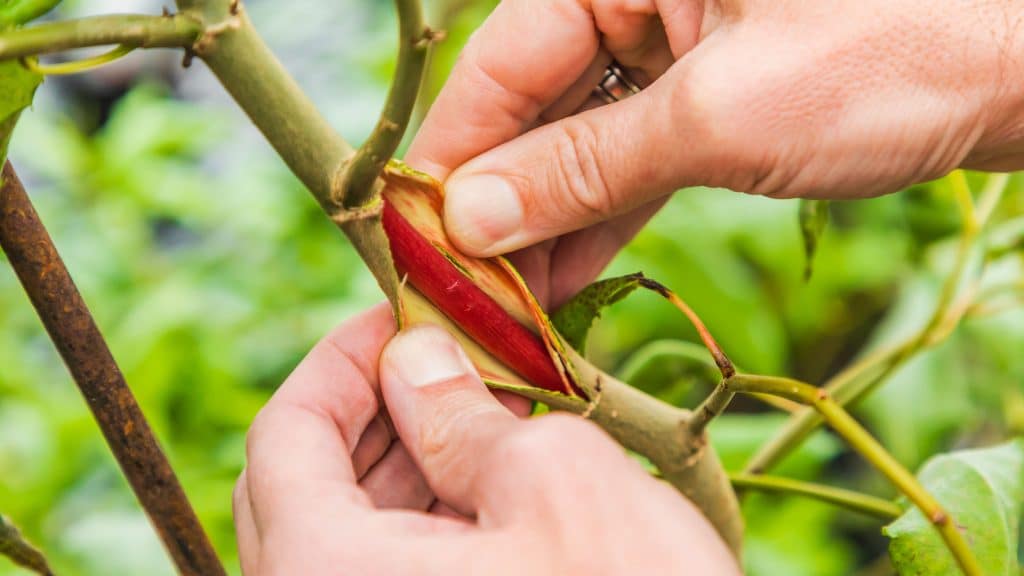 This xylem has been gene-edited to appear NC State red.

The work TreeCo does each day ranges from refining the methods and tools used for making desirable genetic changes to verifying that those changes occurred — and just as importantly, that the trees grew up healthy, with no unintended side effects.

“Everything from the computer code used in the design of genetic surgery all the way to delivering those molecular scaffolds into cells we surgically edit, then grow and develop into bona fide trees,” Barrangou says. 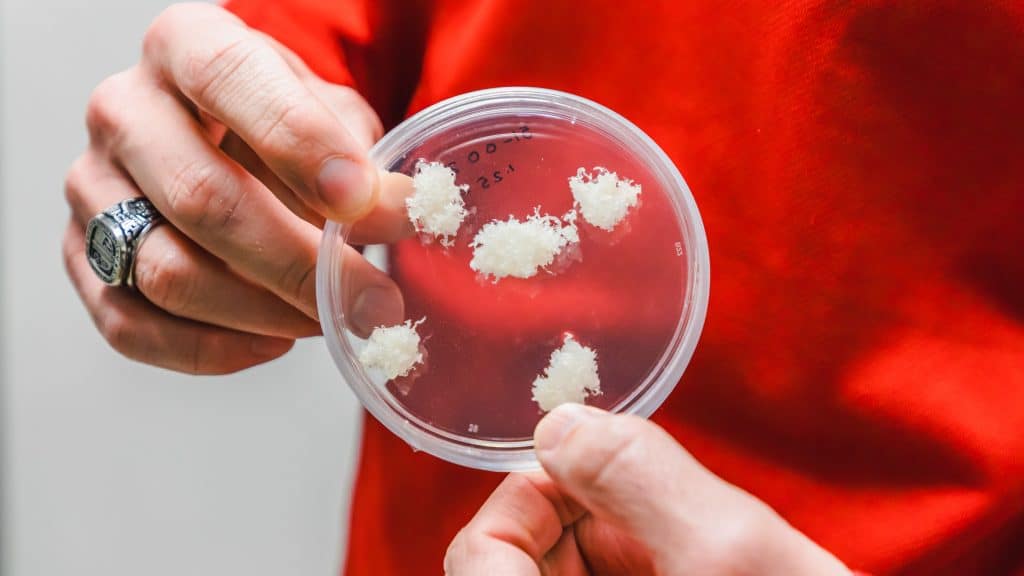 A close-up of the tree stem cells. 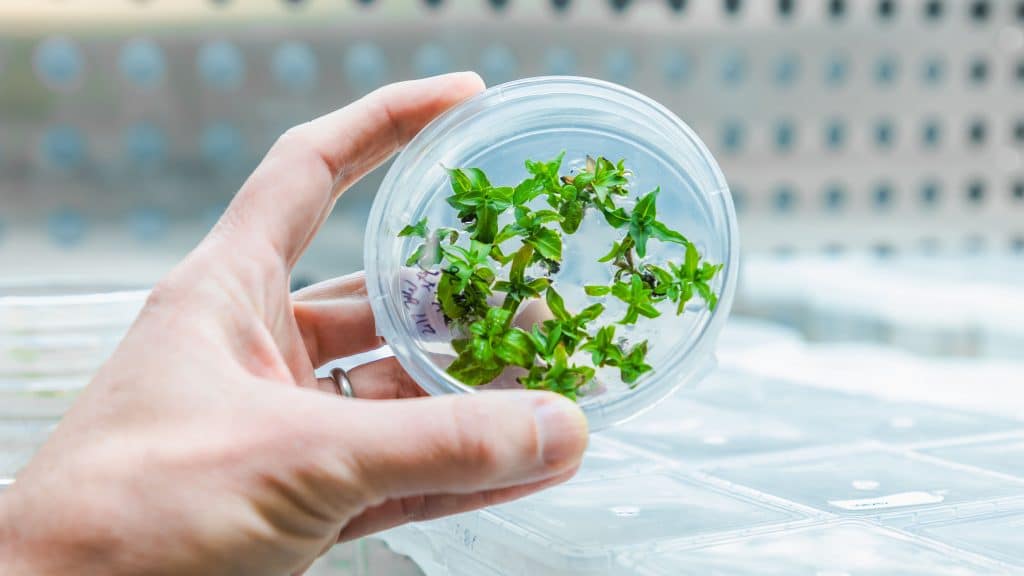 A close-up of the tree plantlets.

After first determining which genes to target in order to change phenotypes of interest, molecular machines are used to select and surgically modify the DNA. Then, once the stem cells have regenerated into plantlets, the baby trees are nurtured in an incubation room for a few weeks. When they’re mature enough, the trees get sent out to the greenhouse to continue growing. About six months later, last but not least, it’s time to characterize their features — testing the trees’ attributes and chemical composition to see how healthy they are and how many of them turned out as expected. 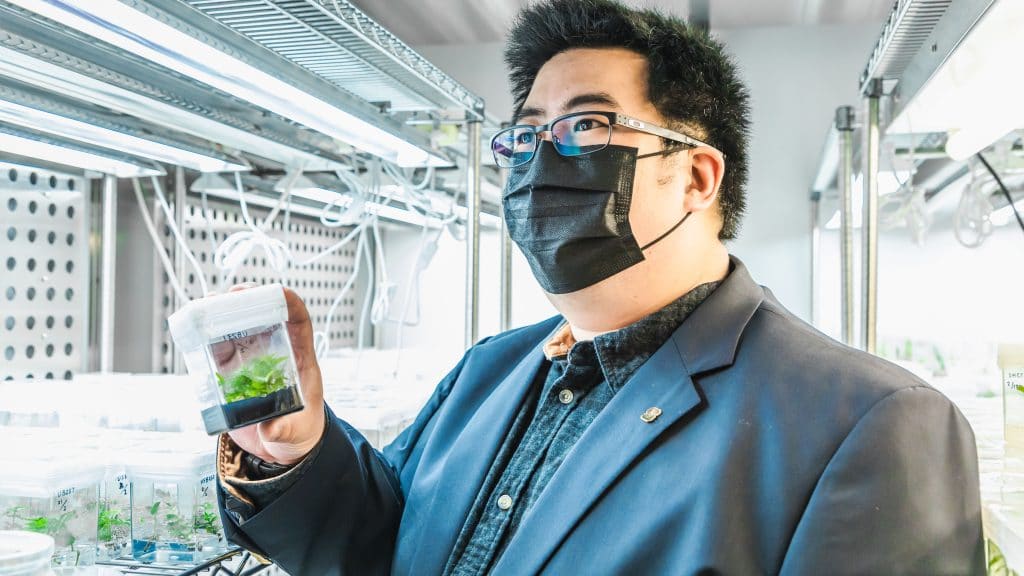 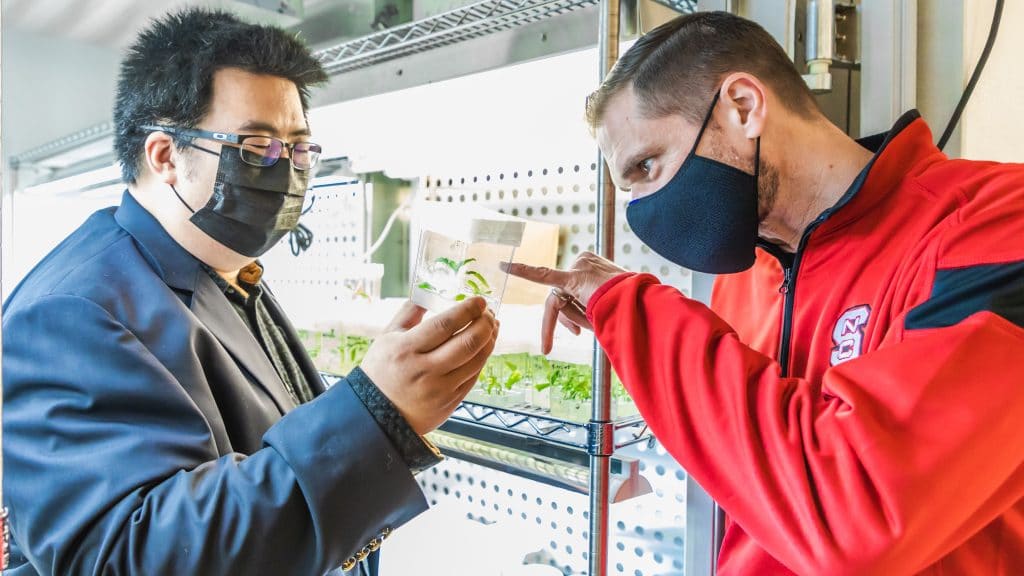 Wang, left, and Barrangou examine plantlets in the incubation room.

Wang and Barrangou are currently nearing the end of the first year of Phase I funding through the National Science Foundation’s Small Business Technology Transfer (STTR) program. Their STTR project, in partnership with NC State, concentrates on Loblolly pines — one of the primary economic tree species in the U.S.

Loblolly pines make up close to 80% of the roughly 3.2 million acres of managed timberland in North Carolina.

The forest sector contributed an estimated total of nearly $35 billion to North Carolina’s economy in 2019 alone, supporting almost 150,000 jobs. Every one of our state’s 100 counties is supported by forestry in one way or another.

How the Chancellor’s Innovation Fund Has Helped

It took only three months from the time they received CIF support for Wang and Barrangou to incorporate TreeCo as a company. While this is an outlier — it normally takes considerably longer — Wang and Barrangou say that it wouldn’t have been possible without the CIF and the Office of Research Commercialization (ORC). 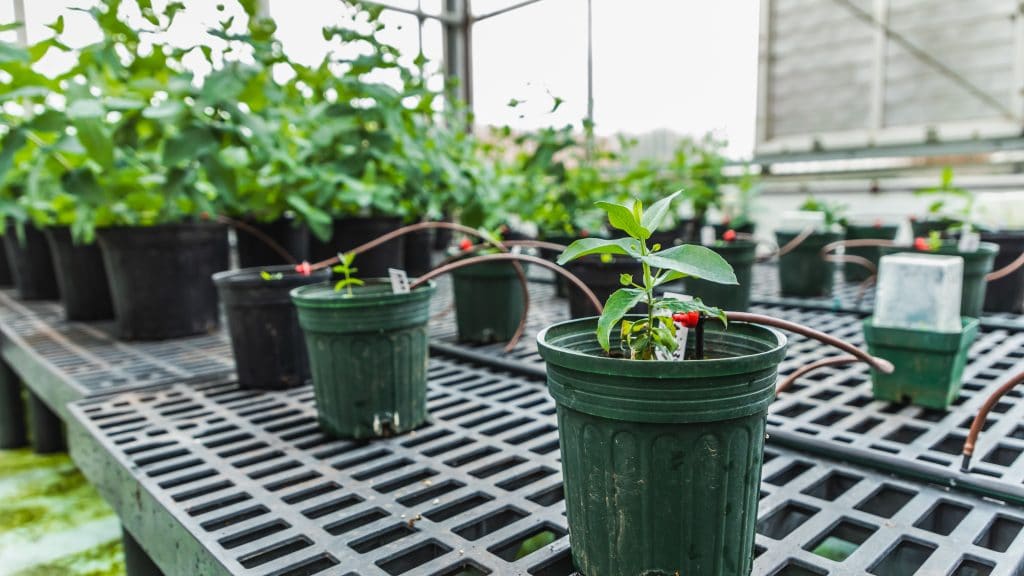 Eucalyptus trees shortly after arriving to the greenhouse.

“The CIF project really allowed us to establish a proof of concept, and validate our technology of DNA-free modality to genome editing in tree protoplasts,” Wang says. “We confirmed the editing of target genes with little to no off-target effects — in fact, we didn’t detect any off-target effects in the samples that we edited.”

Outside the lab, ORC’s team of business and legal experts helped them figure out details like where to locate and incorporate the company, which lawyers they should work with, and how to manage their intellectual property portfolio.

Barrangou says that at the advice of ORC, they have applied for patents across the globe — and that these kinds of comprehensive protections give them “the freedom to operate and deploy [their] knowledge, technology and know-how.”

“Seeing how in just three years we’ve gone from an idea to a successful company, I think speaks volumes,” Barrangou says. “It’s not just advancing the science or advancing the business — we’ve really been able to move the needle, pun intended.”

To learn more about TreeCo, visit its website. For more about the CIF — including information on the next application cycle — visit this Office of Research Commercialization page.

This article originally appeared in NC State News at HTTPS://NEWS.NCSU.EDU/2022/03/TREECO-SEED-FUNDING