GES Colloquium | Emily Pechar – Beyond Political Ideology: Attitudes Towards Government and Corporations on Trust in Science 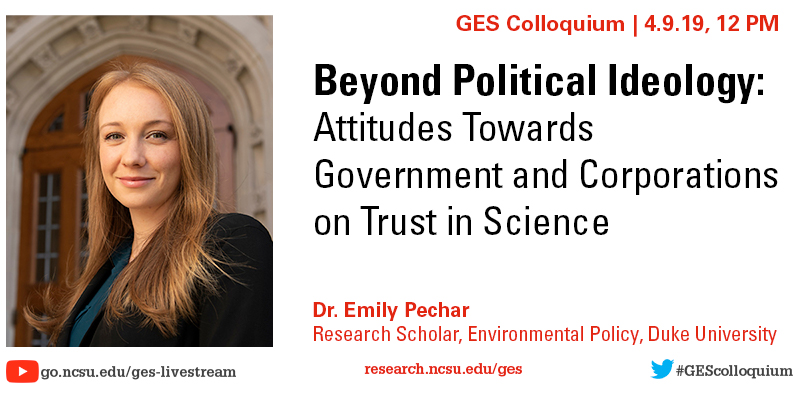 Beyond Political Ideology: Attitudes Towards Government and Corporations on Trust in Science

Understanding public distrust of science is both theoretically and practically important. While previous research has focused on the association between political ideology and trust in science, it is at best an inconsistent predictor. This study demonstrates that two dimensions of political ideology—attitudes towards governments and corporations—can more precisely predict trust in science across issues. Using a survey in the United States and Germany on the science of climate change and genetically modified foods, we find that an individual’s trust in science varies across issues, and that attitudes towards government and corporations are important predictors of this trust.

Dr. Pechar began her academic career at Georgia Tech, where she received a B.S. in International Affairs and French. After working as a consultant with Deloitte Consulting for three years, she returned to academia and recently completed her PhD in Environmental Policy at Duke University. Her research focuses on what informs people’s attitudes on scientific and environmental issues, and how these attitudes inform policy preferences. Specifically, she investigates the role that identities play in driving political attitudes, and how partisan and non-partisan identities interact on highly polarizing issues like climate change or GMOs.