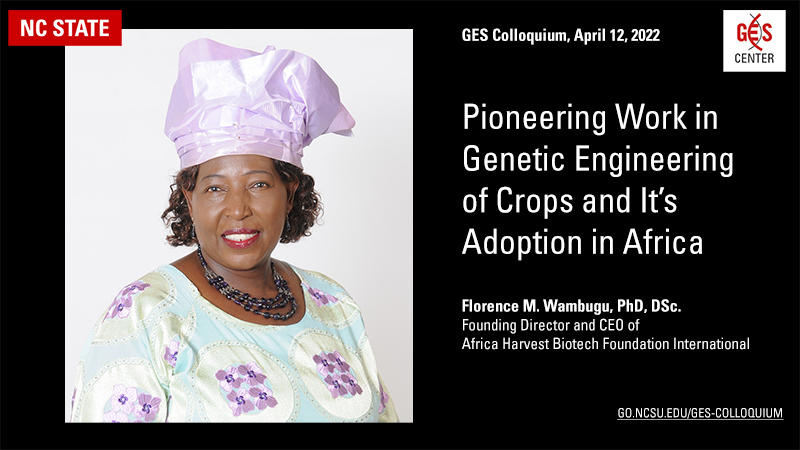 Factors influencing the adoption of GE crops in Africa, and Dr. Wambugu’s pioneering work on GE sweetpotato and with the Africa Biofortified Sorghum (ABS) project.

NOTE: Dr. Wambugu will be traveling from Kenya to join us for an IN-PERSON colloquium in Poe 202. The meeting will also be available on Zoom.

Despite huge adoption of Genetically Engineered (GE) Crops globally in the last two decades, the debate continues especially among interest groups in the public, policy makers, regulators & researchers. During the early days of GE Crops debate, anti-GE Lobby groups argued that Africa lacked capacity to regulate the GE technology and Africa policy makers feared they would lose trade with EU. These positions have changed and according to the latest report of the ISAAA Brief 55, on the Global Status of Commercialized GE Crops in 2019, Africa leads the progress among the regions of the world in adopting GE crops by doubling the number of adopting countries in 2019.

Africa has been regarded as the region with the biggest potential to benefit from GE crop adoption because of the immense challenges relating to poverty, hunger, and malnutrition. However, from an initial list of limited GE crops adopters in 2018, Africa have significantly increased adopters from 2019 to harness the benefits of GE technology. Globally, different continents and regions have taken different positions, with the USA, Canada, Australia, China, and Latin America leading in adoption of GE crops, while the EU remains generally cautious on case-by-case basis by different states. However, Africa is rising from the negative influence of EU anti-GE lobby groups, based on fear of losing trade opportunities, telling by the increased GE confined field trails (CFTs) targeting food security crops.

Dr. Florence M. Wambugu is the Founding Director and Chief Executive Officer of Africa Harvest Biotech Foundation International (AHBFI) — also known as Africa Harvest — in Kenya since 2002. She is a plant pathologist with specialization in virology holding a Ph.D. from the University of Bath, England (1991), Post-Doctoral Research Associate – Biotechnology with a life science company in USA, and holds an Honorary Doctor of Science from University of Bath, England (2008). For over 30 years she has dedicated her life to agricultural research where she’s made significant contributions to the improvement of sorghum, maize, pyrethrum, banana and sweet potato with significant impact on the livelihoods of smallholder farmers. Dr. Wambugu has authored/co-authored over 300 papers, publications, and books in local and international journals, written two books including “Modifying Africa”- How Biotechnology Can Benefit the Poor and Hungry (2001, 2004), and Biotechnology for Africa; Emergence, Initiatives and Future (2014) by Springer.

Dr. Wambugu holds several awards and honors from local and international institutions in recognition of her work in Africa including first place medal winner in Global Development Network Awards under science and technology category in Year 2000 for the TC banana project impact. Named as one of the world top 100 most influential people in biotech today by the Scientific American Worldview special report 2015, Awarded Yara Prize 2008, from the Norway-based Yara Foundation for her significant contribution to fight hunger and poverty in Africa. Dr. Wambugu was awarded the Eve Woman of the year Award by the EVE Magazine, in February 2004 in East Africa in recognition of her contribution to science and its application to combat hunger and poverty in Africa. Another award was given to Dr. Wambugu by the South African government during the commemoration of 10 years of democratic rule for her consistent support to agricultural development. In 2002 she was awarded “Woman of the Year” recognition by the American Biographical Institute for empowering the power through increased food production. She is also a recipient of International Institute of Tropical Agriculture’s (IITA) award in 1981 for successful establishment of a tissue culture laboratory in support of root and tuber crops germplasm improvement; KARI’s 1989 Crop Science award for excellent performance in scientific conferences; International Potato Centre’s (CIP) 1989 Regional Research award, for outstanding advancements in sweet potato research; Pyrethrum Marketing Board of Kenya 1990 farmers support award for successful establishment of a rapid micro-propagation laboratory for pyrethrum (Chrysanthemum) in 1986/7. Recognized by Virology Division of Horticultural Research International in England and KARI in 1991, as exemplary Ph.D. candidate for outstanding dissertation contributions on sweet potato virus disease research work done in Kenya, Monsanto Company Outstanding Performance Award for 1992 and 1993. Participated in key boards including Member of DuPont Biotech Advisory Panel-USA, International Plant Genetic Research Institute, UN Millennium Development goals Hunger Task Force, The Science Board of Bill and Melinda Gates Global Health Challenge and as a Council Member of the Science Technology and Society of Japan.

GES Colloquium is jointly taught by Drs. Jen Baltzegar and Sumit Dhole, who you may contact with any class-specific questions. As conditions allow, colloquium will be held in-person in Poe 202, as well as live-streamed via Zoom (at least January will be 100% virtual). Please subscribe to the GES newsletter and Twitter for updates .