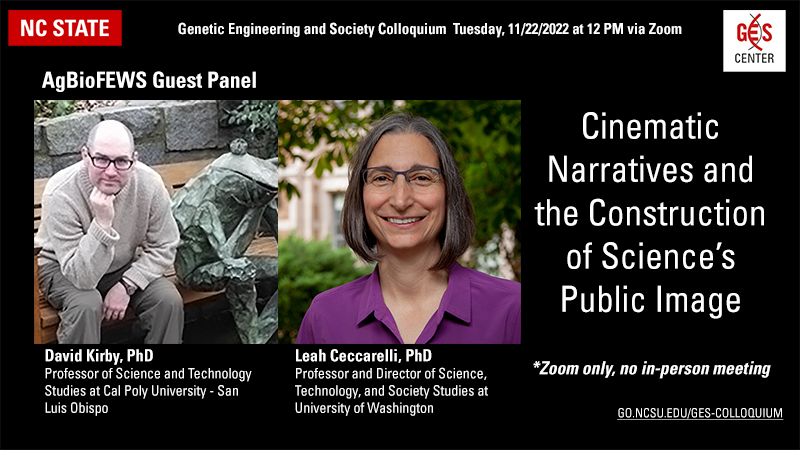 Out of the lab and onto the screen: how cinematic narratives construct the public image of science & technology

NOTE: This week’s GES Colloquium will only be held via Zoom with no in-person meeting. Happy Thanksgiving!

Dystopias, biological warfare, and near human extinction are common tropes in science-fiction film and television. These representations not only provide entertainment, but reflect deep-seated fears and hopes for scientific and technological futures. This is especially true for biotechnology (think Stephen King’s The Stand and Steven Spielberg’s Jurassic Park), where cinematic narratives can shape the public’s imagination of scientists and their practices. Because the interplay of science and media is an important force shaping our understanding of innovation, scientists should be interested in what’s playing on the big screen.

With that in mind, members of GES’s AgBioFEWS Cohort 3 have invited Drs. Leah Ceccarelli and David Kirby to lead a discussion on popular science-fiction films and their impact on the public’s orientation to science and technology, with a special focus on scientists’ credibility and genetic engineering.

Dr. Leah Ceccarelli (@leahcecc) is a critic and theorist whose research focuses on interdisciplinary and public discourse about science. She directs the University of Washington’s Science, Technology, and Society Studies Graduate Certificate program. Selected as a Fellow of the Rhetoric Society of America, and as a recipient of the National Communication Association’s Douglas W. Ehninger Distinguished Rhetorical Scholar award for her career of research, she has also received national awards for her two books on the rhetoric of science, and for a couple of her articles. She serves on several editorial boards and is co-editor of a book series on Transdisciplinary Rhetoric sponsored by the Rhetoric Society of America and Penn State University Press.

Dr. David A. Kirby (@king_gwangi and @CalPolyCLA) is Professor and Chair of the Department of Interdisciplinary Studies in the Liberal Arts and Director of the Science Technology & Society Program at Cal Poly in San Luis Obispo. His research examines how movies, television, and computer games act as vehicles of scientific communication. Several of his publications address the relationship between cinema, genetics and biotechnology. He has also explored the collaboration between scientists and the entertainment industry in his book “Lab Coats in Hollywood: Science, Scientists and Cinema.” He is currently writing a book titled “Indecent Science: Religion, Science, and Movie Censorship.”

GES Colloquium is jointly taught by Drs. Jen Baltzegar and Dawn Rodriguez-Ward, who you may contact with any class-specific questions. Colloquium will be held in-person in Poe 202, as well as live-streamed via Zoom. Please subscribe to the GES newsletter and Twitter for updates .