“How the Health Risks of GMOs Have Been Systematically Misrepresented:

Executive Director of the Alliance for Bio-Integrity and author of Altered Genes, Twisted Truth 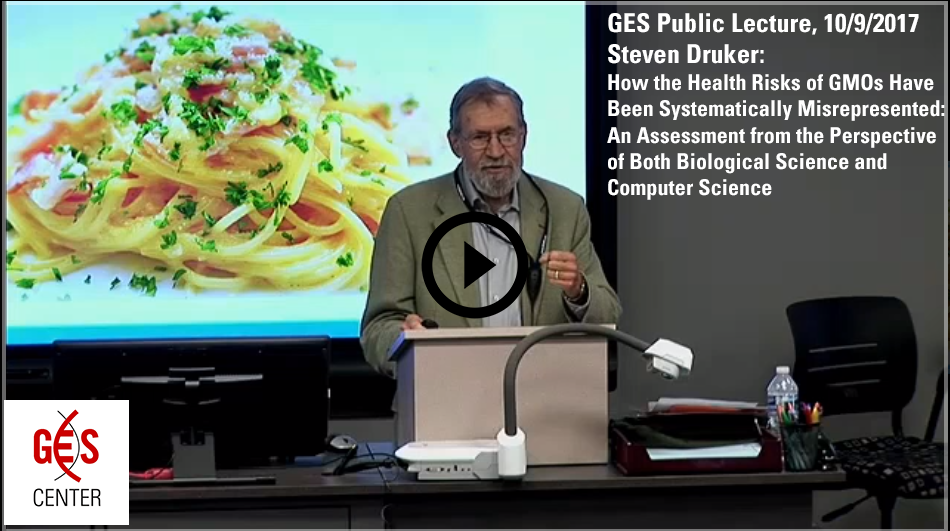 From Steven Druker: Contrary to the claims of the technology’s proponents, producing new foods through genetic engineering entails higher risks to human health than does traditional breeding; and the arguments that have been advanced to convince the public otherwise rely on multiple misrepresentations. Even reports by the US National Academy of Sciences and the UK’s Royal Society cannot withstand scrutiny, and analysis reveals that their central assertions are demonstrably false.

The routine claim that all respected scientists and scientific organizations regard GE foods to be as safe as conventional ones is likewise false. For instance, the Royal Society of Canada, the British Medical Association, the Public Health Association of Australia, and the editors of The Lancet (a premier medical journal) have all expressed concerns about the risks.

Further, although a substantial number of well-conducted studies published in peer-reviewed journals have detected statistically significant harm to the laboratory animals that consumed GE food, the proponents of these products have unjustly attacked — and deceptively described — this research. Indeed, the well-documented (and irrefutable) fact that the evidence has been systematically misrepresented attests to how strongly it raises legitimate concerns, because if it were truly supportive of safety, there would have been no need to distort it.

The degree of risk is even more striking when bioengineering is examined from the perspective of computer science. While computer scientists have gained substantial knowledge about the inescapable risks of altering complex information systems, and established rigorous precautionary measures for managing those risks, the biotechnicians have routinely disregarded this knowledge and violated the related precautionary principles — despite the fact the bioinformation systems they reconfigure are far bigger, far more complex, and far less understood. Indeed, compared to the meticulous manner in which software engineers revise life-critical information systems that they themselves have created, the radical way in which biotechnicians have been altering complex cellular information systems stands out as not merely risky, but reckless.

Moreover, when examined through the lens of computer science, even advanced gene-editing techniques (such as CRISPR-Cas9) still entail abnormal risks when employed in food production.

Despite its importance, a thorough examination of bioengineering from the standpoint of software engineering did not appear until the publication of Altered Genes, Twisted Truth. The soundness and the significance of this analysis have been recognized by many experts. For instance, Thomas J. McCabe, developer of the widely-employed cyclomatic complexity software metric, has called it “especially insightful” and remarked that it exposes how genetic engineering “is more like a ‘hackathon’ than a careful, systematic methodology for revising complex information systems.”

Note that Steven will also be speaking at the GES Colloquium the following day, 10/10/17, on ‘Genetic Engineering and the Chronic Misrepresentation of Facts: The Biggest but Most Overlooked Issue in Bioethics’

Steven Druker is a public interest attorney who founded the Alliance for Bio-Integrity and, as its executive director, initiated a lawsuit that forced the U.S. Food and Drug Administration to divulge its files on genetically engineered (GE) foods. This revealed that politically influenced administrators had covered up the extensive warnings of their own scientists about the abnormal risks, misrepresented the facts, and then allowed these novel products onto the market without requiring the testing that’s mandated by federal food safety law.

He is a prominent commentator on the risks and regulatory issues of GE foods and has served on the food safety panels at conferences conducted by the National Research Council and the Food and Drug Administration; been a featured speaker at symposia at the British House of Commons and the National Congress of Brazil and at press conferences sponsored by the Brazilian Medical Association, the Swedish Consumers Association, and concerned members of the European Parliament; and appeared on numerous television and radio programs — and been featured in numerous newspaper and magazine articles — across the globe.

His book, Altered Genes Twisted Truth: How the Venture to Genetically Engineer Our Food Has Subverted Science, Corrupted Government, and Systematically Deceived the Public, was released in March 2015 with a foreword by Jane Goodall hailing it as “without doubt one of the most important books of the last 50 years.” Among the other scientists who have praised it are David Schubert, a professor and laboratory director at the Salk Institute for Biological Studies, who has called it “incisive, insightful, and truly outstanding”; and Joseph Cummins, Professor Emeritus of Genetics at the University of Western Ontario, who extolled it as “a landmark” that “should be required reading in every university biology course.”

He has been invited to speak at many universities (including Harvard, Columbia, Cornell, and the University of Copenhagen) and has met with government officials world-wide, including the UK’s Environmental Minister, Canada’s Health Minister, and the heads of food safety for the UK, France, Ireland, and Australia. He was also invited to confer at the White House Executive Offices with an interagency task force of President Clinton’s Council on Environmental Quality; and in 2017, he received the Luxembourg Peace Prize for Outstanding Promotion of Environmental Peace.

His articles on genetically engineered food have appeared in several respected publications, including The Congressional Quarterly Researcher, The Parliament Magazine (a Brussels-based periodical), and The Financial Times.

He majored in philosophy at the University of California, Berkeley, received a special award for “Outstanding Accomplishment” in that field, was elected to Phi Beta Kappa in his junior year, and graduated with “Great Distinction in General Scholarship.”  He also attended UC Berkeley’s law school, where he was elected to both the California Law Review and the Order of the Coif (the legal honor society).