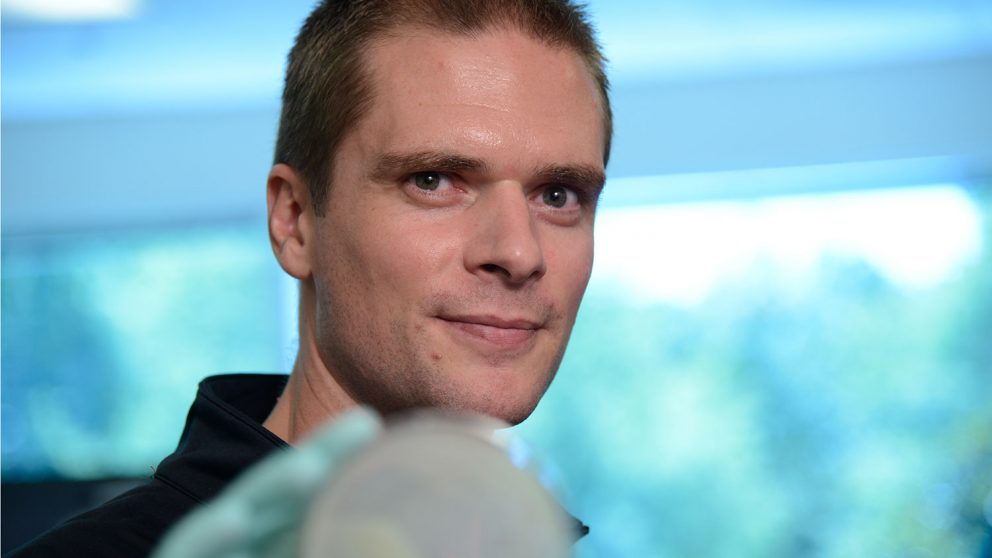 Dr. Rodolphe Barrangou, the Todd R. Klaenhammer Distinguished Scholar in Probiotics Research, University Scholar and associate professor in the NC State Department of Food, Bioprocessing and Nutrition Sciences, will receive the 2018 NAS Prize in Food and Agriculture Sciences for his discovery of the genetic mechanisms and proteins driving CRISPR-Cas systems.

The award recognizes research by a mid-career scientist at a U.S. institution who has made an extraordinary contribution to agriculture or to the understanding of the biology of a species fundamentally important to agriculture or food production. Barrangou will receive a medal and a $100,000 prize.

Barrangou’s groundbreaking research established CRISPR as the adaptive immune system of bacteria, a discovery that promoted the practical use of CRISPR-Cas systems for genome editing. The work has tremendous worldwide applications in food and agriculture, including virus resistance in the widely used yogurt starter culture Streptococcus thermophilus and the potential for translational genome editing in other microbes, crops and livestock.

“What another great honor for Dr. Barrangou from the National Academy of Sciences!” said CALS Dean Richard Linton. “This recognition shows the value of his work and high level of science credibility. We are so proud to have such a national leader here at NC State.”

Starting with their landmark paper in 2007, Barrangou and his collaborators illustrated that bacteria capture and integrate new DNA sequences called “spacers” into a feature of their genome called clustered regularly interspaced short palindromic repeats (CRISPRs). The CRISPR, they discovered, work together with cas (CRISPR-associated) genes to provide specific resistance and adaptive immunity against viruses. The worldwide attention devoted to this discovery allowed researchers to address questions of bacterial survival, population diversity and evolutionary dynamics. Other subsequent studies unraveled the mechanistic basis for the Cas nucleases mode of action.

In the years since, Barrangou has remained at the forefront of CRISPR-related research. He led the first major practical application of these discoveries, an effort to guide adaptive virus immunity in yogurt and cheese starter cultures and helped solve an industrial problem that affects millions of gallons of milk around the world every day. Barrangou also showed that adaptive immunity can also target plasmids and functions by cleaving DNA.

Through all of this, he has also led the growth of this field through teaching, lecturing, serving on scientific advisory boards and co-organizing many of the annual CRISPR biology meetings that arose immediately following the publication of his groundbreaking paper. Recent efforts include the use of CRISPR as antimicrobials and the launch of a local start-up company, Locus Biosciences, in collaboration with the NC State Office of Technology Commercialization and New Ventures.