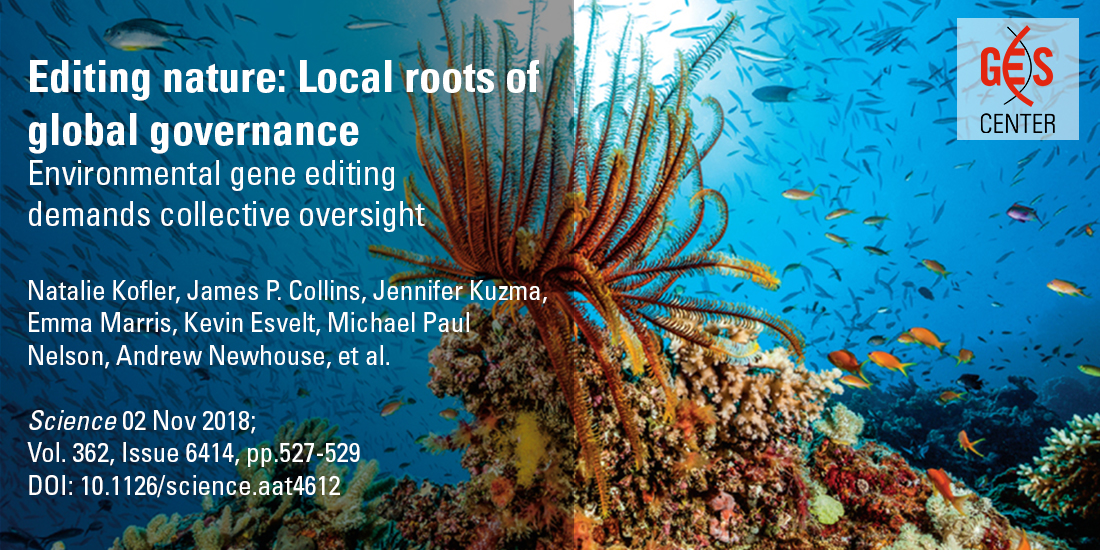 Coral reef ecosystems are estimated to support over 25% of all marine fish worldwide and to contribute over US$1 trillion in economic, social, and cultural value globally. CRISPR-based strategies have been proposed as a means to protect coral from bleaching. Corals genetically engineered to be more resilient to heat stress and ocean acidification could be used to help conserve the Great Barrier Reef (shown above), a UNESCO world heritage site.
PHOTO: DANIELA DIRSCHERL/GETTY IMAGES, via Science

Dr. Jennifer Kuzma, Goodnight-NC GSK Foundation Distinguished Professor and Co-director of the Genetic Engineering and Society Center, was one of the lead authors on an interdisciplinary team calling for global oversight of environmental gene editing in this Science Policy Forum, Editing Nature: Local roots of global governance.

“This article presents new ideas for reconciling global governance of gene drives with local control and authority for decision making.”

Kuzma suggests a “hand-off” model, which begins with global coordination and funding, later transferred to local stakeholders. The global integrative body would exist to assure independence and provide expertise and guidance around topics such as risk assessment, biosafety protocols, and governance models.

“This article presents new ideas for reconciling global governance of gene drives with local control and authority for decision making,” says Kuzma. “Other articles have focused on one or the other whereas we present a model for global and local synergy.”

In Burkina Faso, the government is considering the use of genetically modified mosquitoes to eradicate malaria. In Nantucket, Massachusetts, officials are looking at gene processing as a tool in the fight against Lyme disease. And scientists use gene technology to adapt coral to changing ocean conditions, from the Caribbean to the Great Barrier Reef.

But despite the breathtaking promise of these technologies, there remains great concern about the possible unintended consequences of the release of genes-engineered organisms in the environment – and a lack of supervision of governance.

In a new article published in Science, an interdisciplinary group led by Yale researchers advocates a new global governance to ensure a neutral and informed evaluation of the potential benefits and risks of gene processing. They argue that the complex nature of these technologies requires, on a case-by-case basis, a careful and judicious assessment – a decision-making process that should include local communities that would have the greatest and most direct consequences.

“The greatest risk at the moment is the uncertainty associated with this technology,” says Natalie Kofler, an associate research scientist at Yale School of Forestry & Environmental Studies (F & ES) and lead author of the paper.

“In places like Burkina Faso, for example, it is touted as a silver bullet to get rid of malaria, but these technologies also have the potential to change the genetic make-up of species forever or even kill certain species with extinction. our planet in danger. ”

In the paper, the authors propose the creation of a new, coordinating global body with the authority to convene communities, developers, government organizations and NGOs to ensure a careful and inclusive consultation on all proposals. Such an organization would provide neutral supervision of decision-making and integrate different expertise and perspectives, including participants from affected local communities.

“The confrontation with this challenge goes beyond just including empirical, scientific data, but also to introduce value systems, ethics and relationships with nature, relationships with technology and historically marginalized voices to make a fully informed decision”, said Kofler. “Our proposal provides a blueprint on how to introduce a new governance model, one based on the integration of empirical and normative input, with diverse expertise and world views.”

The paper was inspired by the Editing Nature Summit, chaired by Kofler and hosted by Yale in the spring of 2017. During the two-day event, participants from different disciplines wrestled with the ethical questions surrounding the development and use of technologies for processing genes in the surroundings. Of crucial importance, they concluded, are the questions who should decide which technologies are used and the process by which they reach that decision.

The co-authors, who all participated at the top, represent 12 different academic institutions and more than twelve disciplines, including ecology, genetics, philosophy, policy and journalism.

In the article they looked in particular at CRISPR (clustered regular interspaced short palindromic repeats), editing genes and other related technologies such as gene drives, which are designed to spread genetic changes, including characteristics such as infertility, by species populations.

But if these technologies have the potential to eliminate threats to public health or ecosystems, little is known about possible side effects, such as unwanted mutations and new evolutionary resistance.

“There are many proposals to release genes processed by genes into the wild and even actively direct them to the genomes of native wild populations to address a wide range of environmental issues,” said Oswald Schmitz, Oastler Professor of Population and Community ecology at F & ES and director of the Yale Institute for Biospheric Studies.

“But all of this goes fast and with very little discussion with potentially affected communities.” Formal safeguards are needed to ensure that these well-intentioned technologies are not unintentionally distributed globally to destroy ecosystems and human well-being and the cultures that depend on them. ”

The discussion is complicated by the fact that in some cases the proposed strategies for gene processing can remove very real public health threats, such as the effects of malaria in parts of Africa before death, said James Collins, Virginia M. Ullman, professor of natural history and the environment at Arizona State University and co-author of the paper.

“The burden of infectious diseases such as malaria or the Zika virus is a heavy burden for communities,” said Collins, who, together with a committee from the National Academy of Sciences, evaluated a responsible use of gene processing technology. “And it’s a consideration that really needs to be taken into account when individuals think about whether these technologies need to be developed and then released into the environment.” At the same time, in the area of ​​unintended consequences, you really want to do exactly the same best possible work, the best possible analysis, in terms of risk assessment.

“It is just so important that we pay full attention to what the greater implications would be to release these organisms,” he added. “It is also vital that we rely on context and history to guide us in terms of willingness to continue with these important areas of research, but also that we do it in a way that is cautious, sensible and transparent.

“In this way, individuals and society can make a well informed judgment about which of these technologies should be used and how that should be done.”