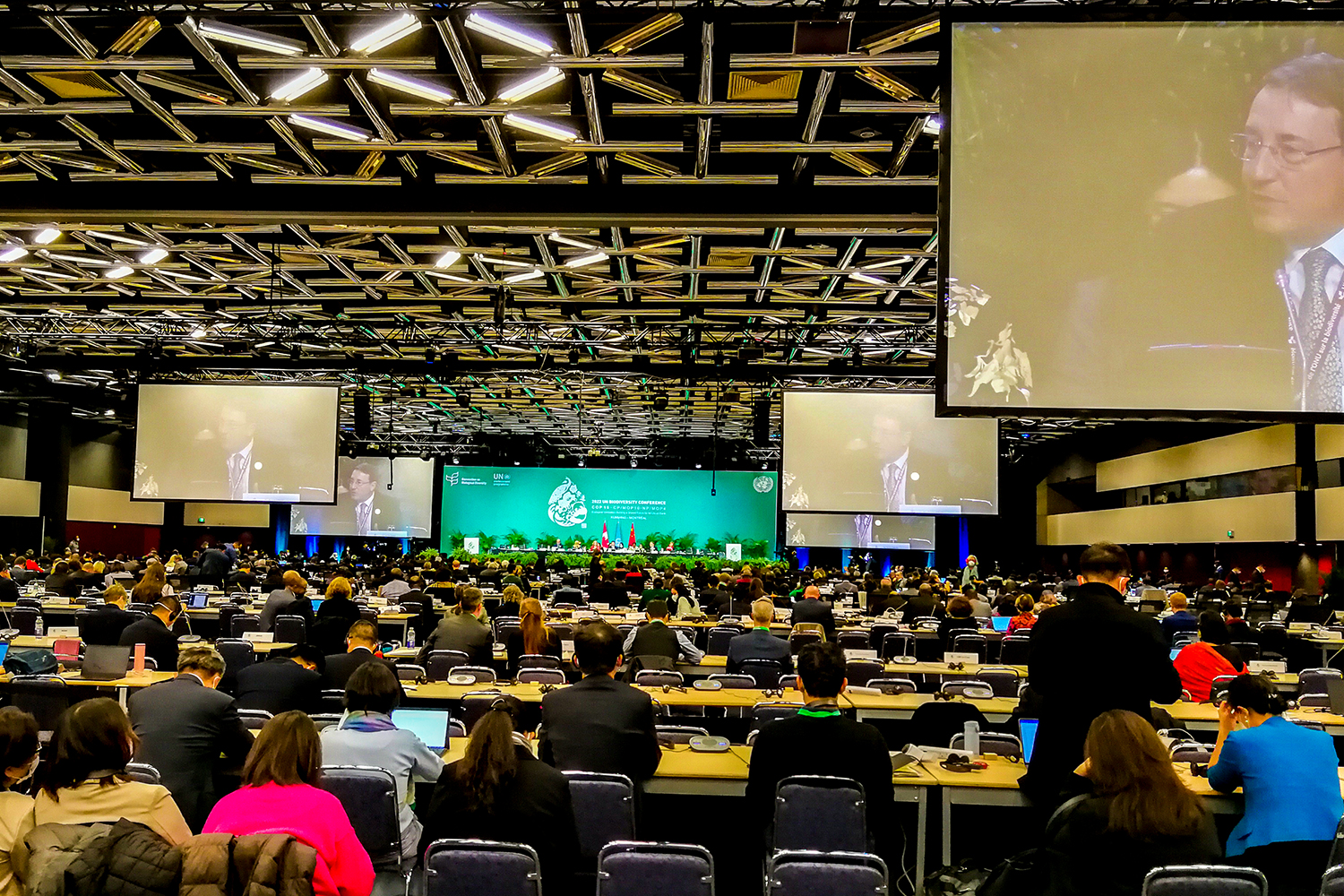 *Note: The opinions expressed in this article are those of the authors as individuals and should not be taken as a reflection of the views of the whole of the Genetic Engineering and Society Center or NC State University.

In December 2022, a contingent of GES graduate trainees joined over 9,000 international delegates gathered to tackle complex global biodiversity issues in Montreal, Canada at the 15th meeting of the Conference of the Parties (COP15) to the Convention on Biological Diversity (CBD). This group included research associate Willy Wei and PhD Fellow Nick Loschin of the Grieger Lab. Over two weeks, they observed peaceful street protests, tensions between various parties, and long hours of debates and discussions. One of the most significant outputs of the Convention was the adoption of the ”Kunming-Montreal Global Biodiversity Framework” (GBF), which received praise from parties, national and international organizations, and the private sector. The GBF includes 23 action-oriented global targets contributing to the United Nations 2030 Sustainable Development Goals (SDGs), plus four long-term goals related to the 2050 Vision for Biodiversity, which prioritizes “living in harmony with nature”.

The difficulty in reaching consensus

Integral to the discussion topics at COP15 was the role of biotechnology and its various applications in breeding and biodiversity conservation. In particular, Target 17 of the GBF deals with the interactions between biotechnology and biodiversity conservation for urgent action over the decade to 2030. Discussions on the role of biotechnology—including gene editing and synthetic biology—focused on using a precautionary approach, risk assessment, management, monitoring, and implementation of horizon scanning. While heavily discussed, most of these aspects were removed in the final text due to a lack of consensus. Rather, the parties agreed to use the general term “biosafety measures” in the final text.

Related to Target 17, was the discourse between some countries’ preferences to develop and implement biotechnologies with fewer restrictions, while others argued for a more precautionary approach with greater restrictions. In this case, there were numerous disagreements between Parties, with some focused on their own interests in using and developing biotechnology. It is also interesting to note that the distribution of benefits of biotechnology is mentioned in the final text of Target 17, although there are no mentions of potential risks. 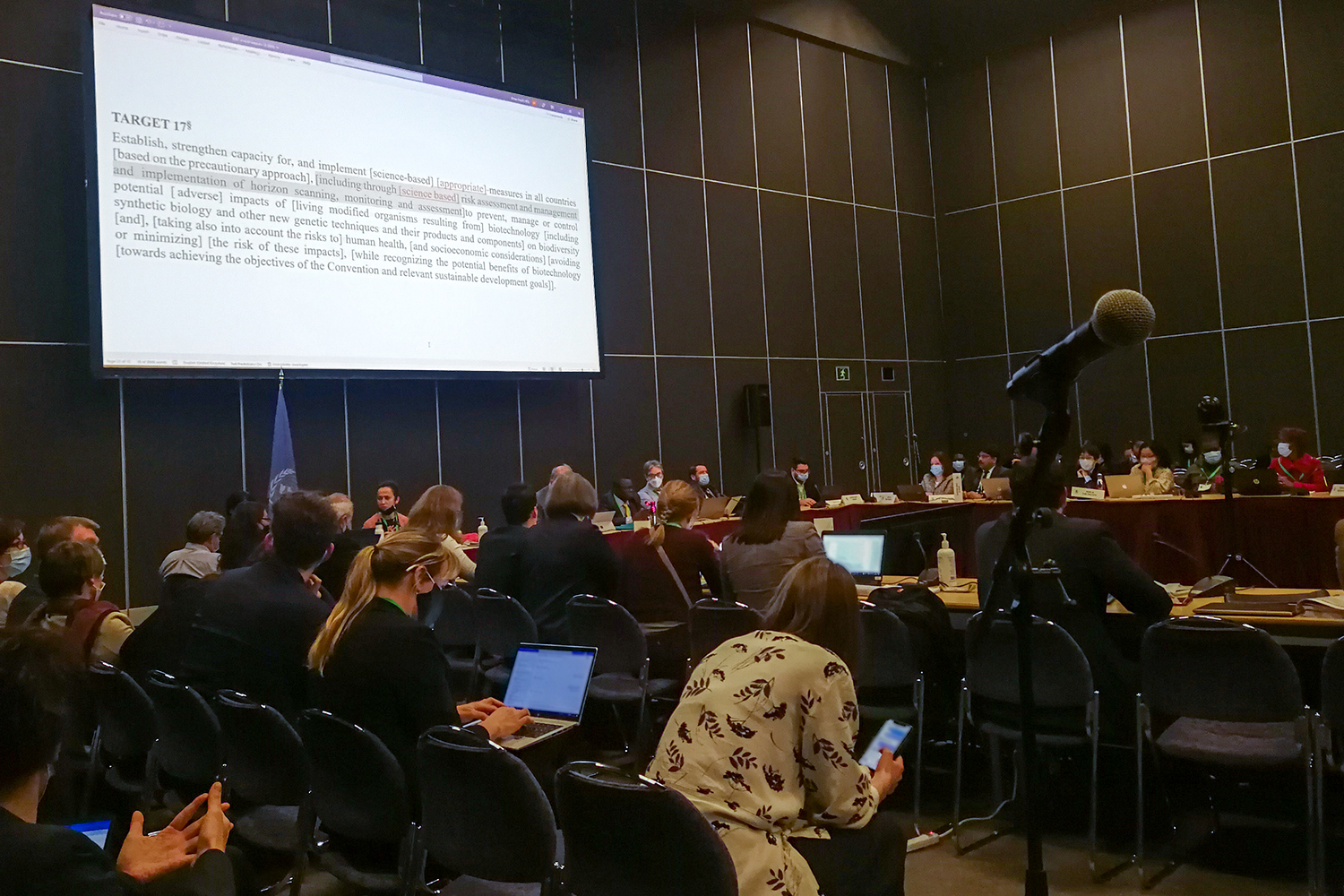 The processes of horizon scanning, assessment, and monitoring remained in the COP decision on synthetic biology, to “identify and prioritize trends and issues regarding developments of synthetic biology that need to be considered vis-à-vis the three objectives of the Convention.” This inclusion is aided with the support of a new, interdisciplinary Ad Hoc Technical Expert Group (AHTEG) on synthetic biology. In addition, the Subsidiary Body on Scientific, Technical, and Technological Advice of the CBD convention is tasked with reviewing potential positive and negative impacts of synthetic biology on biodiversity conservation.

Gene drives were also an important part of the conversations among the Parties and different groups that attended the COP meetings, regarding the interaction between biotechnology and biodiversity conservation. Concerns were expressed that gene drives could potentially spread through an entire species or within the natural environment and result in permanent changes in ecosystems. Ultimately, the COP15 decision on synthetic biology calls for the consideration of uncertainties regarding engineered gene drives and suggests applications of a precautionary approach. The development and use of gene drives for environmental conservation and agricultural production have also been explored deeply by members of the GES Center housed at NC State. Among other research activities, GES hosted an interdisciplinary workshop to better understand potential risks of select gene drive organisms in June 2022.

In addition, the role of digital sequence information (DSI) and overlap with synthetic biology, was discussed during the meeting, given the important role that DSI can play in determining genetic resources available. DSI is currently the term used during the CBD convention to refer to genetic information from genetic resources, although there has not yet been a consensus on the term and its scope among the parties and other stakeholders. Target 13 of the 2030 mission (to halt and reverse biodiversity loss) and Goal C of the 2050 vision (living in harmony with nature) of the Kunming-Montreal GBF address the fair and equitable sharing of benefits that arise from the use and DSI of genetic resources, as well as traditional knowledge associated with genetic resources. 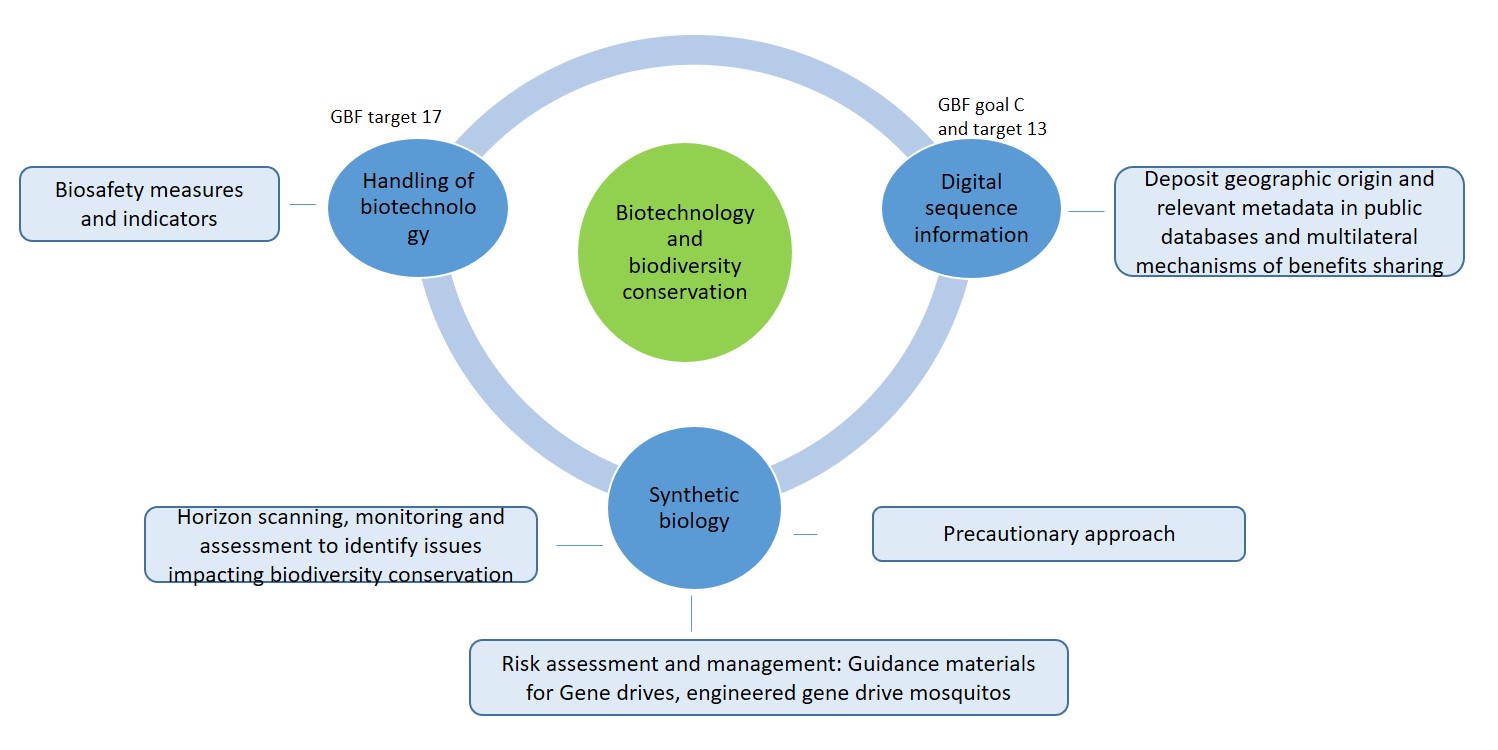 Topics on the interaction between biotechnology and biodiversity that were discussed at the COP15 biodiversity conference held in Montreal, Canada in December 2022.

Adoption of a common framework

GES as an interdisciplinary resource

More broadly, members of the GES Center have been investigating the interdisciplinary implications of using biotechnology in a variety of applications, including for biodiversity conservation, over the past several years. In particular, the GES Center supports engaged scholarship and inclusive dialogues surrounding the opportunities and challenges with using biotechnology in society, including those focused on ensuring biodiversity at global scales. For more information about the GES Center, see: https://research.ncsu.edu/ges/about/.

Related GES Colloquium with AgBioFEWS Fellows, “Has the UN Biodiversity Convention been a force for ‘good’ or ‘evil’ in how biotech crops are regulated globally?” January 17, 2023

Dr. Willy Wei is a research associate in the Department of Applied Ecology (AEC) at NC State University. His research focuses on understanding the impacts of biotechnology on biodiversity conservation as well as assessing potential environmental and societal impacts of genetic engineering in food and agriculture under the supervision of Dr. Khara Grieger. Dr. Wei’s participation in the COP15 meeting was supported by the Grieger Lab and the Global Project Supplement Fund of the Office of Global Engagement at NC State. He can be reached at wwei24@ncsu.edu.

Nick Loschin is a AgBioFEWS Fellow PhD student in the AEC and the GES Center supervised by Dr. Grieger. He is interested in the interdisciplinary intersections between risk assessment, sustainability, and community engagement within the context of new food and agriculture technologies. He can be reached at naloschi@ncsu.edu.

Dr. Khara Grieger is an Assistant Professor in Environmental Health & Risk Assessment in the AEC, the PI of the Interdisciplinary Risk Sciences program at NC State and a member of the Executive Committee of the GES Center. She can be reached at kdgriege@ncsu.edu.

The Genetic Engineering and Society Colloquium is a seminar series that brings in speakers to present and stimulate discussion on a variety of topics related to existing and proposed biotechnologies and their place within broader societal changes.

In-person, no Zoom this week. Happy new year! Our first class will be held in the 1911 Building, room 129 and lunch will be served! Come join us to catch up on one another’s research and to hear about the Colloquium’s new format and speaker list for Spring 2023.

Has the UN Biodiversity Convention been a force for ‘good’ or ‘evil’ in how biotech crops are regulated globally? | GES Colloquium

AgBioFEWS Fellows Asa Budnick, Nick Loschin, Joseph Opoku Gakpo and Modesta Abugu will share their observations on and interrogate practices at the UN Biodiversity Conference (COP15) in Montreal, Canada that eventually lead to global decisions on the governance of biotech crops.