Less than four years ago, Casey Boutwell was a licensing associate for the Office of Research Commercialization, helping NC State faculty take their research from the lab into the marketplace. Now, he’s the CEO of Bionica Labs, a holding company for two startups focused on technologies with the potential to markedly improve human healthcare — NIRSleep and Dermisense.

While serving as a licensing associate for the Office of Research Commercialization, from 2013 to 2016, Boutwell was also working on an MBA from NC State’s Poole College of Management. He completed his MBA in 2016 and then worked for the ASSIST Center, one of two NSF Engineering Research Centers on NC State’s campus, from 2016 to 2018.

“I would not be able to successfully commercialize these technologies if it weren’t for the skills I acquired at NC State,” Boutwell says. “The success of these startups is predicated upon my experiences there.” 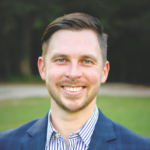 NIRSleep recently won $25,000 in funding as one of six first-place winners of the 2019 Lulu eGames, NC State’s annual startup competition. Boutwell and NIRSleep took first place in the Daugherty Track, which is exclusively for startups actively licensing intellectual property (IP) from NC State.

The IP behind the patented technology NIRSleep licensed was developed by Alper Bozkurt, an NC State electrical and computer engineering professor, with partial support from a 2014 NIH grant to the university. Bozkurt also received funding from the Chancellor’s Innovation Fund (CIF) in fiscal year 2013. The CIF launched in 2010 with support from Chancellor Randy Woodson, in partnership with the Office of Research Commercialization, to help bridge the gap between public and private funding in order to ultimately bring new products and technologies to the marketplace.

The researcher who developed the IP Dermisense is licensing — Michael Daniele, an NC State assistant professor of electrical and computer engineering — received $75,000 from the CIF in 2018. Dermisense is currently an Affiliate Industry Member of the ASSIST Center.

On top of the skills and knowledge Boutwell gained as both a student and employee of the university, he says his time at NC State allowed him to cultivate relationships with students, researchers, industry liaisons and other professionals in the field of research commercialization.

Boutwell met CTO Jason Strohmaier as well as Ember Melcher and Callie Kimberly, chief product officer and chief operating officer, respectively, while they were all working for the ASSIST Center.

It was NC State’s “Think and Do” culture — not just academically, but as an organization — that encouraged Boutwell to seek these opportunities, cultivate these relationships and grow so quickly as a professional. 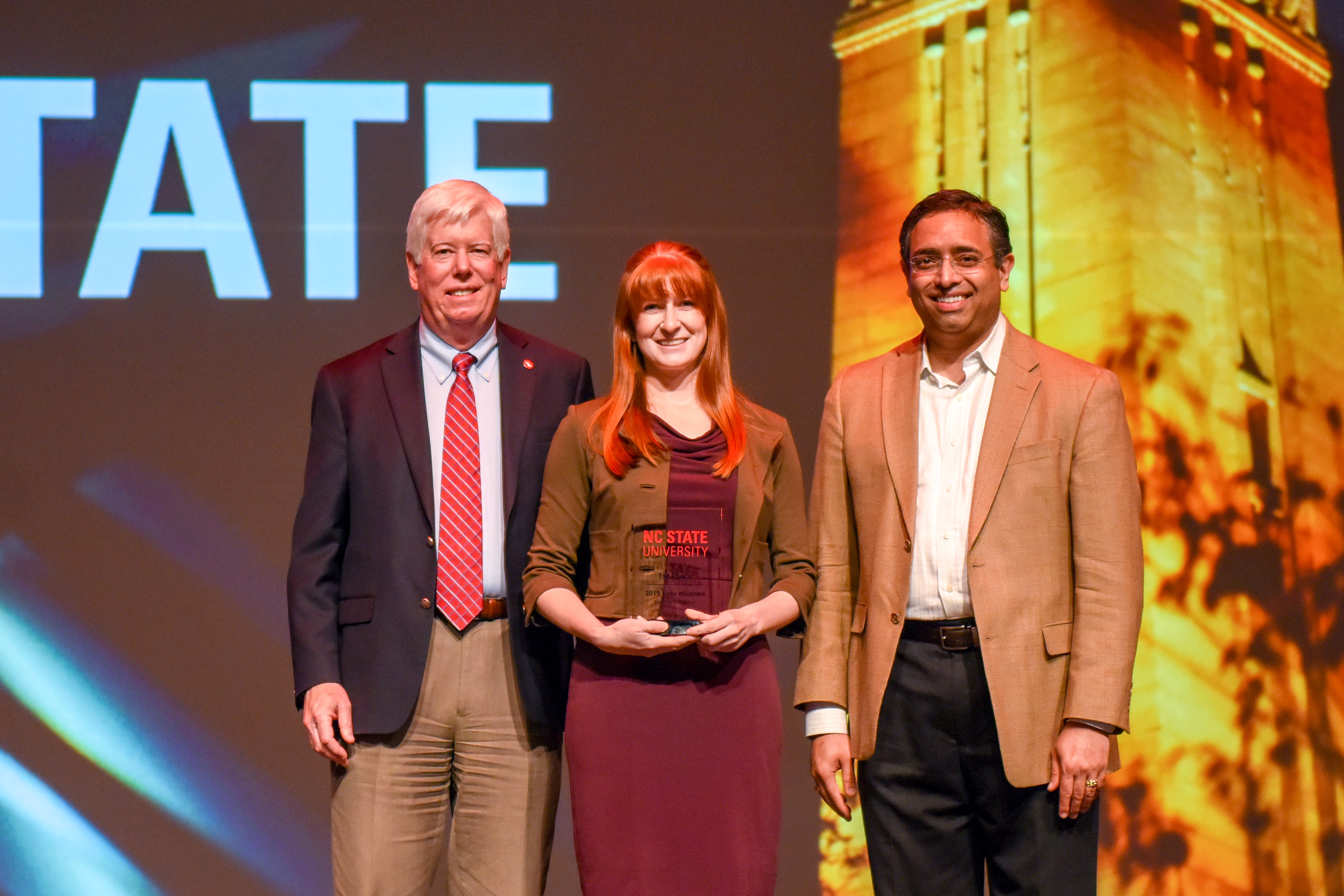 “In addition to the academic freedom NC State provides — they support the freedom to act,” Boutwell says.

He credits NC State for giving him the flexibility to push the envelope and pursue his ideas, even if they might fail — as many ideas, and startups, do.

Boutwell also gives much credit to NC State’s Office of Research Commercialization for “going above and beyond” to help startup companies — a testament to why NC State consistently ranks among the nation’s top universities (without medical schools) for technology transfer.

“They’ve found a connection for (NIRSleep) at RTI, they’ve let me know about other grant opportunities they see, they support us at conferences where we’re co-registered, they tweet our news and more,” Boutwell says. “They have been much more supportive than any other technology transfer office I heard about when I was in the field.”

Since its founding, the Office of Research Commercialization has helped launch more than 135 startups and licensed more than 1,500 patents — resulting in the creation of over 8,500 jobs, more than 600 new products in the market, and over $1.7 billion raised in funding.

From designing his companies’ websites to creating detailed branding materials, including a pre-packaged mock prototype of the wearable sleep sensor NIRSleep is working to develop, Boutwell says Campbell’s contributions have been invaluable. 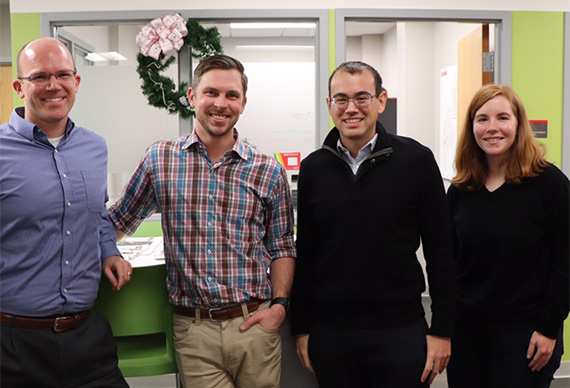 “It allows us to present a sophisticated and mature public face,” Boutwell says, “which continues to open innumerable doors for us.”

Being a university without a medical school means the path to large financial payoffs for much of the research commercialized is often not as direct, in comparison to much of the research commercialized by universities with medical schools. This requires long-term support and long-term vision, which Boutwell says Director Wade Fulghum certainly has.

NIRSleep is working to develop an easy-to-use, wearable sensor that uses infrared light to measure the oxygen concentration in the brain. As the startup’s name suggests, the sensor is initially being developed to dramatically improve the ease of sleep monitoring. Current technology is not only cumbersome but often requires that the physician assessments be conducted in a clinic, which results in a much different experience than a person would have during a normal night’s rest.

“With NIRSleep, we can monitor patients in a remote setting, such as in the comfort of their home,” Boutwell says. “Extending care beyond the clinic will transform sleep disorder diagnosis, helping millions of Americans recover and perform better.” 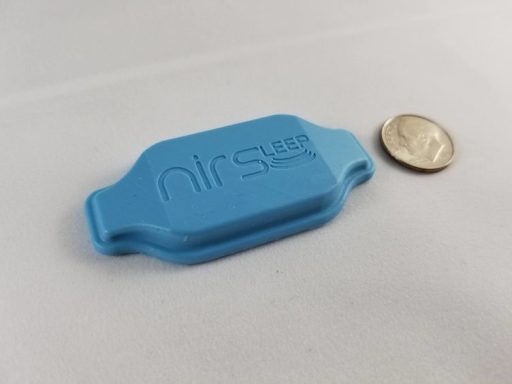 An early prototype of the NIRSleep sensor, pictured next to a standard U.S. dime. 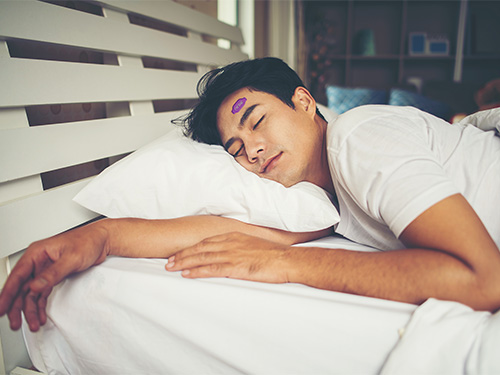 A digitally rendered image of what the sensor could one day look like when worn.

But wearable infrared imaging also has a number of other potential health applications, including monitoring patients with critical brain injuries for cerebral hypoxia — a lack of oxygen to the brain — while whizzing through the air miles above sea level during aeromedical transport.

Dermisense is working to develop a microneedle technology that will allow for painless extraction of dermal interstitial fluid (ISF) — a key carrier of immune cells, proteins, metabolites and more — which creates a network of fluid-filled spaces in human tissue, known as the interstitium. Dermal ISF is the liquid that fills skin blisters.

Dermisense aims to significantly increase ISF extraction rates (by nearly three times the limits of current technology), while causing no pain, avoiding interface with blood, and eliminating the need for complex chemistry or equipment to manufacture or use its platform.

A prototype of the swellable microneedle patches Dermisense is working to develop.

A closeup image of the microneedle technology used in Dermisense’s wearable patches.

Many diagnostic tests currently rely on the extraction and analysis of blood, which includes many of the same biological elements as ISF. Though ISF is easier to access than blood, the current extraction methods are painful and slow. The technology Dermisense is developing — swellable patches made of durable nanomaterials designed to painlessly draw ISF to their surface — could eventually make the process so easy that patients could do it themselves, presenting “bold new possibilities for the optimization of human performance as well as the detection and treatment of disease.”

Unlike most current platforms, Dermisense’s microneedle test strip is “flexible, porous, and allows the passage of moisture and oxygen to the skin.” Combined with the ability to work with zero power, these attributes may allow for “up to 72 hours of continuous wear.”